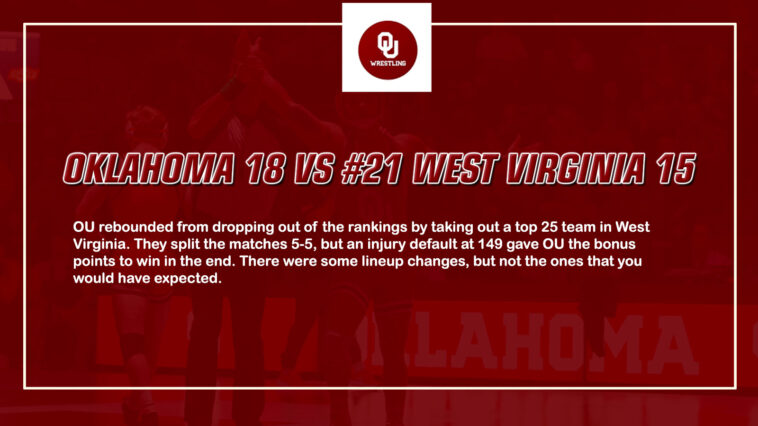 OU rebounded from dropping out of the rankings by taking out a top 25 team in West Virginia. They split the matches 5-5, but an injury default at 149 gave OU the bonus points to win in the end. There were some lineup changes, but not the ones that you would have expected. OU suffered some upsets but got some of their own.

Mosha Schwartz got a solid win over a clearly dangerous wrestler in Titus. He didn’t hit any big moves but showed he has the ability to be patient and pick his shots. Henson used his pace and technique to push for a major, but came up just short as time was running out. Roberts and Heindselman both suffered tough losses with late scores and rideouts being the difference in close matches.

There are some questions about health in the lineup as Keegan Moore didn’t wrestle tonight. Now the Sooners have a week off until heading to the state of Iowa to take on #3 Iowa State and #13 Northern Iowa. Before then here are some takeaways from the upset win.

Good win but not ideal circumstances

Like the title says, OU got the win and looked good in most matches, but the way it went was not ideal. At 149 Sam Hillegas had to injury default after being headbutted by Moore as they tied up.