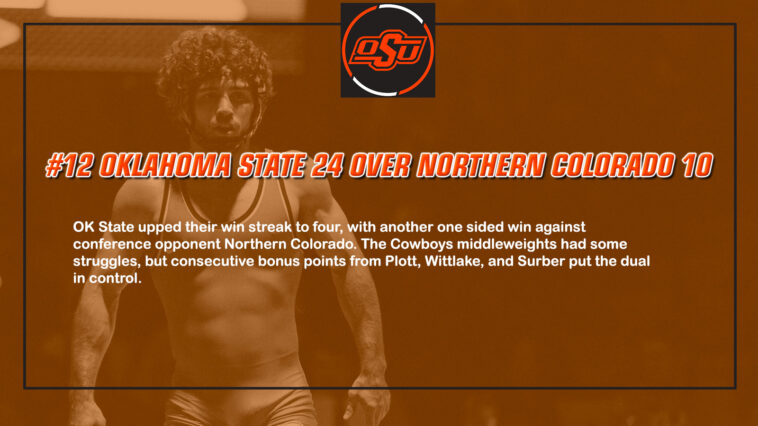 OK State upped their win streak to four, with another one sided win against conference opponent Northern Colorado. The Cowboys middleweights had some struggles, but consecutive bonus points from Plott, Wittlake, and Surber put the dual in control.

There were a handful of potential lineups listed, even Kyle Haas at heavyweight. However the only changes at the end was true freshman Zach Blankenship getting a ranked opponent in his first dual start. Here are some takeaways from OK State’s third conference win this year.

While the Voinovich score doesn’t show it, the Cowboys had some issues as the dual started at 149lbs. Voinovich was up 3-2 after a second period takedown, but Sandoval went for a big throw late to give up four points. Sandoval is tough, but I thought Voinovich may show more separation after a 4-1 over him last year.

Gfeller had a wild back and forth match, with some controversial takedown non calls. Zerban managed to get a takedown in the second period, but Gfeller tied it up with a reversal. It went to OT after Gfeller had locked up riding time but gave an escape. In OT he didn’t waste any time with a quick takedown to win. Gfeller is an All-American contender, but needs to clean up some positions to find more consistency.