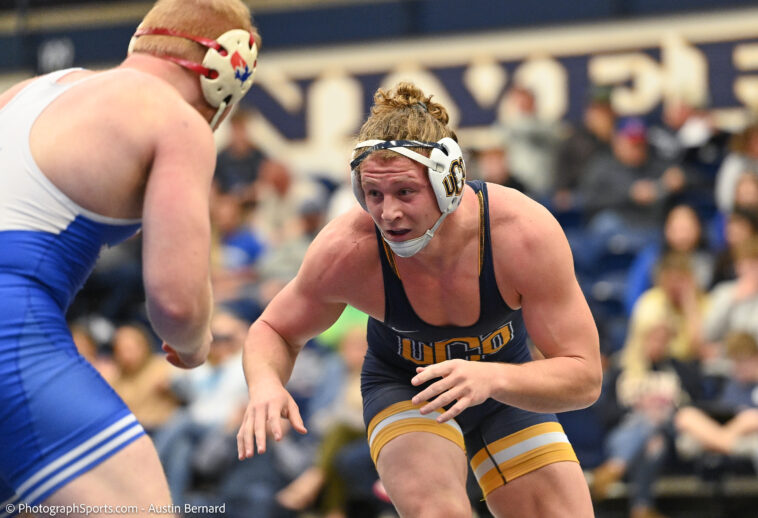 The sophomore star capped a dominating 2021-22 season March 14 in St. Louis, Mo. by capturing the 197-pound national title with a 6-0 finals shutout of Indianapolis’ Derek Blubaugh.

Abney moves on to the ballot for Division II Wrestler of the Year against the five other top regional winners – Hvy Andrew Dunn of Kutztown, 141 Zeth Brower of Lander, 125 Cole Laya of West Liberty, 165 Matt Malcolm of Nebraska-Kearney and Hvy Darrell Mason of Minnesota State-Mankato.

“This is a great honor for Dalton and one that’s obviously well deserved,” head coach Todd Steidley said. “He came into the season really focused and worked hard all year to achieve his goal of winning a national championship.

“Dalton wrestled at a high level all season. He’s so hard to score on and dominated pretty much everybody he met.”

He finished 26-0 with 10 falls – eight of those coming in the first period – and four major decisions. Opponents scored a combined 12 points in those 26 matches.

Abney came up big in clutch moments as well, with his 4-0 finals victory over Blubaugh in the Midwest Classic finals back in December clinching the team title for the Bronchos.

He cruised to the Super Regional IV crown with a first-period fall, 11-1 major decision and 6-0 finals triumph, then gave up one point in four matches at the national tournament.

Abney opened the national meet with 4-0 and 5-0 shutouts, then scored a third-period fall over the 2019 national champion before claiming the championship with the easy 6-0 win over Blubaugh.

A product of Tulsa Cascia Hall, Abney is now 49-4 for his career and is already a three-time All-American. He earned that honor in 2020 by the NWCA after the national tournament was canceled by the coronavirus – gaining an extra year of eligibility in the process — and finished as national runner-up last season before winning it all last month.