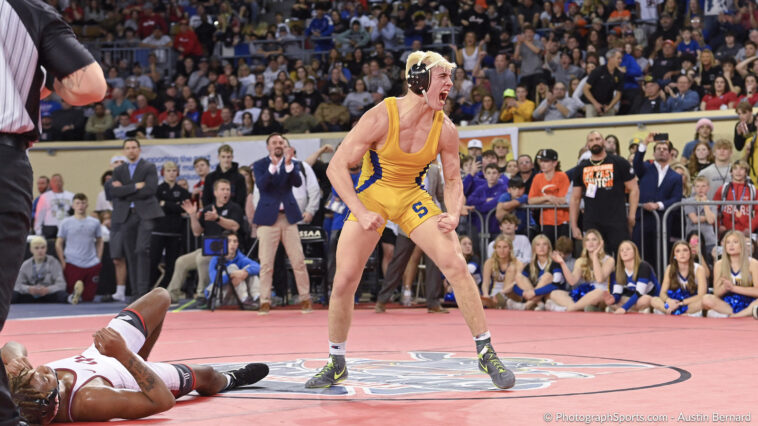 What a State Tournament we got to enjoy!  From incredible individual and team performances to upsets and last second wins – the tournament had it all!

As expected, Stillwater, Collinsville and Tuttle turned in amazing performances to claim their respective state championships.  In Class 3A, a three-team race went down to the wire before Marlow claimed the title and after a 2nd place Regional finish, the Union Girls surprised many by winning the Girls state title.

Stillwater had nine medalists including four champions to win the Class 6A title by 25 points over 2nd place Edmond North.  The 158 points scored by Stillwater ties them for the 4th most Team Points in the Class 6A State Tournament.  Cale Hughes not only claimed his 3rd title, but he also became the 100th state champion in Stillwater wrestling history.

Collinsville took nine to State and pushed all nine into the finals to win Class 5A by 99 points over 2nd place Guthrie.  Collinsville crowned seven champions which puts them in a tie with five other schools for the 2nd most individual state champions.  The 185 points scored by Collinsville ties them with the 1994 Webster team for most points at the Class 5A State Tournament.  Collinsville has now won 11 titles in the past 12 years, including the last five in a row (shared 2019 title with Skiatook).

Tuttle once again dominated Class 4A, winning their ongoing state record 14th straight title and 19th title overall.  The Tigers had 11 medalists including crowning six champions.  The six champions now gives Tuttle 112 individual state champions.  The 210 scored by Tuttle puts them in a 3rd place tie with the 2018 Tuttle team for most points scored at the State Tournament.

In Class 3A, going into the 160 lb. finals, it was still a three-team race with Marlow and Blackwell tied at 117 and Jay at 113.  All three teams had three wrestles left, but Marlow won all three of their matches with senior leader Kyle Wilson sealing the championship when he won the 220 lb. individual title.   In a race that close all points are critical, but 5th place Regional finisher Dason Davis scoring 13 big team points with his 3rd place finish and Case Rich winning overtime matches against 2X state champ Jose Flores in the semifinals and state champ Gavin Montgomery in the finals were huge.  Perry’s Chance Davis and Kaleb Owen won individual titles for the Maroons giving them 180 individual champions in their 100th year of wrestling.

Listed below are few of the State Tournament results for the record book. Included is a list of 4X state placers, led by Oklahoma’s 44th 4X state champion Cameron Steed of Collinsville.  Also listed are an amazing group of 12 freshmen champions who took the first step to be 4X state champions.