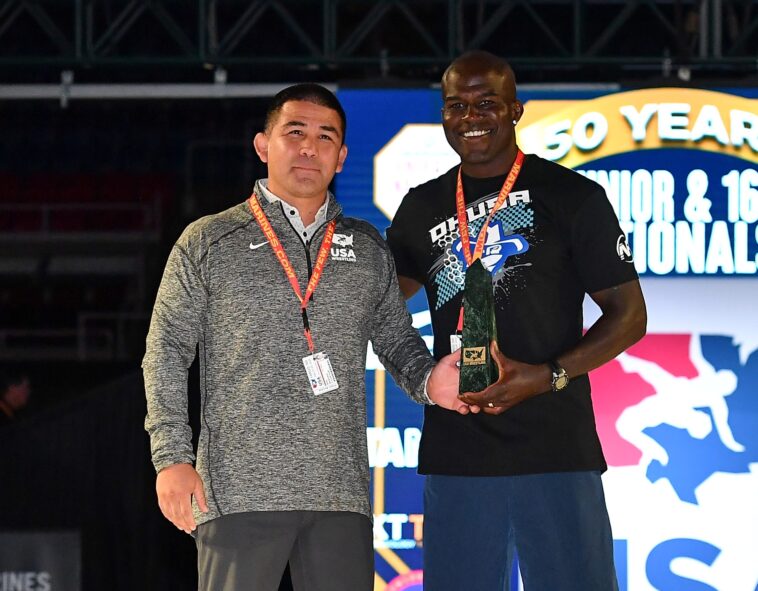 The Oklahoma Chapter of the National Wrestling Hall of Fame has announced their 2021 class.

OKLAHOMA CITY – Nine individuals who have made outstanding contributions to the sport of wrestling will be honored by the Oklahoma Chapter of the National Wrestling Hall of Fame.

Mike Clevenger, Vance Conallis, Donald Keith, Dave Martin, Hardell Moore, Robert Park and Gerald Winnard will receive the Lifetime Service to Wrestling award while Rear Admiral William J. McDaniel will be honored as an Outstanding American and Richard Morris will be presented with the Medal of Courage award.

The Lifetime Service award is presented to coaches, officials and contributors who have given a minimum of 20 years of service to wrestling. The Outstanding American award is presented to those individuals who have used the disciplines of wrestling to launch notable careers in other walks of life, such as science and technology, business and industry, government and the military, and the arts and humanities.

Vance Conallis (Lifetime Service to Wrestling) officiated for 30 years and worked more than 20 Oklahoma high school regional tournaments, seven Dual State tournaments and 15 Oklahoma state high school championship tournaments. He was named Oklahoma Wrestling Coaches Association Official of the Year in 2011-12 and was twice selected as an All-State official. Conallis was president of the Central Oklahoma Wrestling Officials Association in 2017-18 and continues to serve as state rules interpreter for the Oklahoma Secondary Schools Activities Association while also working as an account executive for Oklahoma Gas & Electric. He was a two-time state placer for U.S. Grant High School and attended University of Central Oklahoma and Southeastern Oklahoma State University.

Dave Martin (Lifetime Service to Wrestling) directly oversaw wrestling during his 34 years as an administrator in the Oklahoma State athletic department. He was an assistant coach at Oklahoma State from 1975 to 1978, helping the Cowboys win Big Eight titles in 1975 and 1978 while finishing third at the NCAA tournament in 1975 and 1976 and second in 1977. He was interim head coach for Oklahoma State in 1992 when the Cowboys won the Big Eight title and finished second at the NCAA tournament. He coached the Stillwater YMCA youth wrestling program and administered Stillwater Youth wrestling tournaments from 1971 to 1974. From 1971 to 1975, Martin refereed high school matches in Oklahoma and Kansas and Oklahoma State duals and inter-squad matches. Interim athletic director for Oklahoma State from 1993 to 1995, he was one of 12 athletic directors responsible for the foundation of the Big 12 Conference and served as interim commissioner of the Big 12 in 1998. He was a member of the National Wrestling Rules and Championship Committee from 1998 to 2002, serving as chairman for three years. Martin returned to the National Wrestling Rules and Championship Committee from 2010 to 2014, serving as chairman for three years. He served as the tournament director for the Big 12 Conference Wrestling Championships in 2018, 2019 and 2020. On the mat, Martin was an NCAA champion and two-time finalist for Iowa State who helped the Cyclones capture the NCAA team title in 1969 and 1970. He was an Iowa state high school champion in 1965 and 1966 and helped Algona High School win the state team title in 1966. Martin is a member of the Glen Brand Wrestling Hall of Fame of Iowa, the Iowa State University Athletics Hall of Fame, the Iowa Wrestling Hall of Fame, and the Iowa High School Wrestling Hall of Fame.

Rear Admiral William J. McDaniel (Outstanding American) was a five-time Navy wrestling champion and from 1972 to 1976 he won either a gold or silver medal in freestyle and Greco-Roman at the United States Interservice Wrestling Championships from 1972 to 1976. McDaniel, who competed in the United States Olympic Trials in 1968, won a silver medal in freestyle at the CISM Military World Games in 1974. An Oklahoma state champion for Blackwell High School in 1960, he won Oklahoma AAU championships in 1961 and 1968. A varsity wrestler for Oklahoma State, he earned a bachelor’s degree in psychology in 1964 and received his M.D. from the University of Oklahoma in 1969. The 32-year naval veteran was team physician for the United States wrestling team at the 1984 Olympics and worked several world championships. He remained involved with Olympic medical care through 2000 and worked the world track and field championships in 1976, the world basketball championships in 1978 and the world cycling championships in 1986. McDaniel was head physician for the National Sports Festival in 1982 and 1983 and was a member of the United States Olympic Committee from 1996 to 2000. In 2001, McDaniel served as Johns Hopkins University’s liaison to the federal government after the September 11th attacks. He led Naval Hospital Ship USNS Mercy in its tsunami relief efforts in Indonesia in 2005 and was also part of Hurricane Katrina relief efforts. McDaniel was inducted into the Oklahoma State University Hall of Fame in 1994 and into the Blackwell Hall of Fame in 2006.

Hardell Moore (Lifetime Service to Wrestling) began his coaching career in 1999 with the Edmond Generals and remained with the club until 2013 when he founded the Oklahoma Wrestling Academy with Steve Asbury and Carl Belford. The state’s first year-round wrestling academy, OWA provides the opportunity for wrestlers to learn and continue to grow in the sport. Moore was a member of the Oklahoma National Team coaching staff in 2003 and 2004 and returned to the staff in 2012, becoming coaching director in 2018. He has coached wrestlers who have gone on to wrestle at Oklahoma State University, the University of Oklahoma, the University of Central Oklahoma, West Virginia University, Duke University, Campbell University and Gardner-Webb University. On the mat, he was a two-time Oklahoma state high school champion for Coweta High School and a two-time Big 12 champion and two-time NCAA All-American for Oklahoma State. Moore was also a Cadet national champion and a Junior Nationals runner-up. He received the Gallagher Award, presented annually to an OSU alumnus who has exemplified the spirit and leadership eminent in the tradition of champions, in 2016 and is a member of the board for the National Wrestling Hall of Fame’s Oklahoma Chapter.

Richard Morris (Medal of Courage) coached at Kerr Junior High School in Del City from 1981-88, including coaching four-time NCAA champion, three-time Oklahoma state high school champion and National Wrestling Hall of Fame Distinguished Member Pat Smith. An avid bicyclist, Morris had a terrible accident on a mountain bike while visiting his son, Dustin, out of state in 2017. In an instant, he became a quadriplegic and spent six months in the hospital. Through hard work and prayer, Morris has adapted to his new normal and is living more independently than ever thought possible. He has modified feeding utensils, a modified fishing pole and even a modified lawn mower to help him do many of the things he enjoys. He was recognized in 2019 with the INTEGRIS Jim Thorpe Rehabilitation Courage Award, honoring individuals who have overcome disabilities caused by injury or illness, by facing the physical and mental challenges of rehabilitation with courage and determination. Morris also officiated and coached junior high basketball, football and baseball and high school tennis. He went on to coach at Carl Albert High School. Morris wrestled at Del City High School and attended the University of Central Oklahoma.

Robert Park (Lifetime Service to Wrestling) began his coaching career in 1988 with Sperry Public Schools as an assistant high school wrestling coach and head junior high school wrestling coach. He became head wrestling coach in 1993 and later added head football coach to his duties. Park led Sperry to the Oklahoma Dual Team and State Team titles in 1989 and to the Dual Team title again in 1992. He has a career record of 190-62 and has coached 18 state champions, multiple state-placers and qualifiers, and 10 All-State wrestlers. He was Region 7 Coach of the Year in 2004 and was the East All-State coach in 2001. On the mat, he was an Oklahoma state champion and All-State wrestler for Sperry in 1984 and wrestled at Northeastern Oklahoma A&M College.

Gerald Winnard (Lifetime Service to Wrestling) began his coaching career in 1979 at Plainview High School in Ardmore and led his team to a third-place finish at the Oklahoma state tournament in 1981. He then coached at Davis High School and later became head coach at Ardmore High School. Winnard led Ardmore to a third-place finish at the Oklahoma state tournament in 2002 and coached four state champions, two state runners-up, multiple state-placers and 14 state qualifiers. He was named Oklahoma Coaches Association Regional Coach of the Year and twice coached the Oklahoma Senior National team. Winnard also worked as a referee for 10 years. On the mat, he was a two-time Oklahoma state high school champion for U.S. Grant High School, going 30-0 and being named Outstanding Wrestler of the state tournament in 1967. He was a Big Eight champion for Oklahoma State and helped the Cowboys win NCAA titles in 1968 and 1971. Winnard’s brother, Larry, received the Lifetime Service to Wrestling award in 2009.