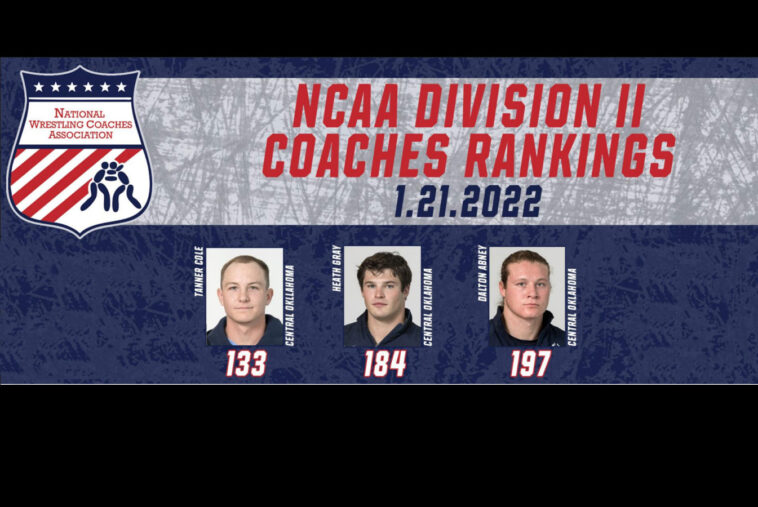 The Bronchos collected 109 points, edging St. Cloud by three points in holding down the No. 1 spot for the third straight poll. UCO trimmed the Huskies 19-14 in the finals of the NWCA Division II National Duals two weeks ago, ending SCSU’s NCAA-record 77-match winning streak.

Nebraska-Kearney is third in the team rankings with 89 points, followed by West Liberty (71) and McKendree (54). Gannon, Indianapolis, Wisconsin-Parkside, Findlay and Augustana round out the top 10.

Tanner Cole (133), Heath Gray (184) and Dalton Abney (197) all remained No. 1 to lead eight Central individuals ranked in the top 12 at their respective weight.

Brik Filippo (149) and Ty Lucas (157) are rated third, while Nate Keim (141) is fourth, Paxton Rosen (125) sixth and Hunter Jump (165) 11th. Rosen and Jump made the only individual moves for the Bronchos, with Rosen going up two spots and Jump making his debut in the rankings.

St. Cloud and UNK both have nine ranked individuals, with each led by one No. 1 pick – 141 Joey Bianchini for the Huskies and 149 Sam Turner for the Lopers.

UCO, 7-0 on the season and riding a 13-match winning streak, go to Kearney, Neb. Saturday to face No. 14 Adams State and Western Colorado.