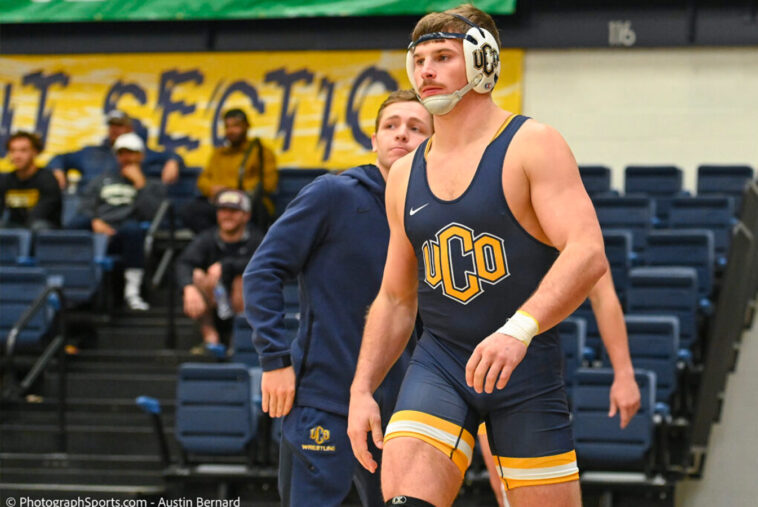 Gray became just the third four-time regional champion in UCO’s illustrious history in taking the 184-pound title and was joined on the top of the podium by 125 Paxton Rosen, 133 Tanner Cole, 149 Brik Filippo, 197 Dalton Abney and Hvy Shawn Streck. It’s the most regional champs for the Bronchos in 20 years.

The Bronchos also got a runner-up finish from 157 Ty Lucas and a third-place effort from 174 Alex Kauffman, while 141 Nate Keim and 165 Hunter Jump both placed fourth.

The top-three finishers at each of the 10 weights qualified for the NCAA Division II Wrestling Championships that are set for March 11-12 in St. Louis, Mo., with Central set to take eight individuals in search of their 16th national title – and the first since 2007.

“It was a total team effort and I’m really proud of the guys for the way they battled today,” head coach Todd Steidley said. “It was a long day and we had a lot of tough matches that could have gone either way, but we came out on top in most of them.

“Everybody wrestled their heart out and left everything on the mat. It was a great accomplishment, but we’re not done yet. We’ve got one more goal left in front of us.”

Gray, the defending national champion who entered the regional ranked second, trimmed McKendree’s third-rated Dan Filipek 2-1 in the finals. Neither wrestler scored an offensive point, but Gray pushed the action throughout and Filipek was called for stalling twice.

The second of those calls came midway through the final period and gave Gray the winning point in the second straight regional finals battle between the two. Gray joined Cole Province (2001-04) and Kyle Evans (2005-08) as four-time regional champions for the Bronchos.

Rosen beat McKendree’s second-rated Christian Mejia in the finals for the second consecutive season, pulling out a tight 4-3 triumph. The fifth-ranked Rosen took the lead on a takedown with 46 seconds left and controlled Mejia the rest of the way to wrap up his 11th win in a row.

The top-ranked Cole also used a late score to pull out a close win, breaking a 1-1 tie with Lindenwood’s Tanner Hitchcock with a takedown on the edge of the mat just eight ticks from the final whistle. It was the 11th straight win for Cole, who was regional runner-up last year.

UCO prevailed in another nail-biter at 149, with Filippo earning a 5-4 victory over Indianapolis’ Logan Bailey. A takedown with one second left in the second period was the difference in that match as the top-ranked Filippo stretched his winning streak to 12.

No. 1-rated Abney had no trouble winning his first regional crown after two runner-up finishes, scoring a pair of takedowns and adding nearly four minutes riding time in a 6-0 shutout of fourth-ranked Derek Blubaugh of Indy. Abney improved to 22-0 on the season.

The fifth-ranked Streck overwhelmed the field at heavyweight, capping a dominating day with a 14-4 major decision of Indy’s Cale Gray behind a five-takedown attack. The mid-season addition moved to 9-0.

Lucas, ranked sixth, fell to No. 5 John Ridle of Central Missouri 2-0 in settling for his runner-up finish. Kauffman gave UCO eight national qualifiers with his clutch third-place finish, using a pair of first-period takedowns to down Central Missouri’s Austin Morgan 5-3.

Keim and Jump both lost 4-2 decisions in the consolation finals.

Rosen advanced to the finals with a pair of easy wins, following a first-round bye with a 10-0 major decision and 7-1 victory.

Cole breezed into the championship match, notching a 15-0 technical fall and 7-1 win after earning an opening-round bye.

Filippo had a first-round bye, then coasted to a 16-1 technical fall and 6-4 decision in making the finals. A takedown with two seconds left in the second period was the difference in the semis.

Lucas cruised to a 12-3 major decision in his first match before notching three takedowns in a 7-2 semifinal triumph after opening with a bye.

Gray wasn’t tested in making the finals, picking up a 16-1 technical fall in the first period and then racking up five takedowns in a 13-4 major decision after drawing a first-round bye.

Abney followed an opening-round bye with two lopsided wins, needing just 2:16 to notch his ninth fall of the season in the quarterfinals before posting an 11-1 major decision in the semis.

Streck was untouchable in his first two bouts after earning a first-round bye, piling up 12 takedowns in 19-6 and 15-5 major decisions to march into the finals.

Kauffman made his debut at 174 after wrestling all season at 184 – and once at 197 – and pulled out a 6-5 overtime win in his first match. He dropped a close 3-2 decision in the semifinals, then bounced back with a 7-0 shutout to make the consolation finals.

Keim started the tournament in impressive fashion with two first-period falls, then dropped a tough 1-0 semifinal decision on a riding time point to old nemesis Peter Kuster of Drury.

Keim bounced back with a 4-0 shutout in the consolation semis before falling short of a national tournament berth with an overtime loss to Brody Norman of McKendree. Norman scored a controversial reverse on the edge of the mat with six seconds left to tie the match at 2-all, then got the winning takedown 30 seconds into the sudden-victory period.

Jump battled back from a hard-fought 4-3 first-round loss with three consolation wins, but was also denied a national tournament bid.

The redshirt freshman avenged two early-season losses to Drury’s 10th-ranked Will Kuster with a 12-2 major decision, followed with an 18-3 technical fall and then knocked off No. 8 Kameron Frame of Newman 8-6 to make the consolation finals. He fell 4-2 in the third-place bout to third-ranked Cort Peterson of McKendree.