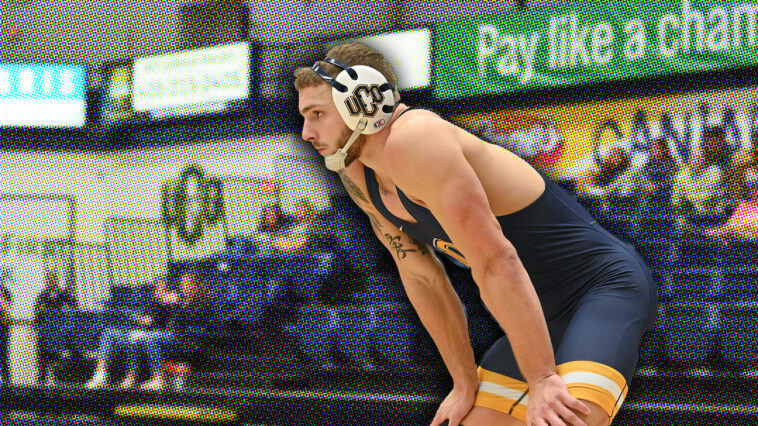 Months of practice, long road trips and intense competition has led to the most important day of the season for Central Oklahoma and that comes Saturday when the top-ranked Bronchos participate in the NCAA Division II Super Regional IV Tournament.

UCO journeys to St. Charles, Mo. to join 10 other teams in the one-day event Saturday at Robert F. Hyland Arena on the Lindenwood campus, with first-round action to begin at 10 a.m. The tournament will run straight through, culminating in the placement matches at approximately 6 p.m.

The top-three finishers at each of the 10 weights qualify for the NCAA Division II Wrestling Championships, which are set for March 11-12 in St. Louis, Mo. Five other regional tournaments are being held around the country this weekend, with 30 qualifiers also advancing from each of those events.

“This is the biggest tournament of the year,” sixth-year head coach Todd Steidley said. “You can’t do anything at nationals if you don’t get there, so the first order of business is to qualify. This may be the toughest regional in the country, but we’ve prepared all year for this and our guys are ready.

“We have to take one match at a time, not look ahead and be prepared to bounce back if there’s some adversity. We’ve accomplished a lot this year, but we still have some goals in front of us and one of those is moving all 10 guys on to the national tournament.”

The Bronchos captured their 20th regional title – and the first since 2012 – last year at Hamilton Field House, edging Lindenwood by one point. UCO advanced seven individuals to the national meet, finishing sixth there.

Central won the last of its 15 national championships in 2007.

ABOUT THE REGIONAL: Five of the 11 teams are ranked in the top 25 – No. 1 UCO, No. 5 McKendree, No. 10 Indianapolis, No. 12 Lindenwood and No. 22 Central Missouri. Rounding out the field is Drury, Kentucky Wesleyan, Maryville, Newman, Ouachita Baptist and William Jewell.

ABOUT THE BRONCHOS: UCO went a perfect 13-0 in duals, finishing with just the fourth undefeated season in the 69-year history of the program.

Here’s a look at each of Central’s 10 regional participants.

133 Tanner Cole, Jr. – Ranked No. 1 with 16-2 record and has eight bonus wins (four majors, two falls, two tech falls) … Riding eight-match winning streak and should be seeded first in the regional … Has 11-0 record against Division II competition this season, including 2-0 vs. ranked foes … Runner-up in both the Dan Harris and Lindenwood opens and missed Midwest Classic to illness … Finished fourth in regional tournament in both 2019 and ’20 at 125 pounds in just missing qualifying for nationals, then made it at 133 last year with runner-up showing … Placed third at national meet to earn All-America honors … Has 52-17 career record.

141 Nate Keim, Jr. – Ranked fourth with 20-4 record, including eight bonus wins (four tech falls, two falls, two majors) … Has eight-match winning streak and should be seeded first or second in the regional … Is 14-3 against Division II competition this season, including 5-3 mark vs. ranked opponents … Won the Dan Harris Open and was runner-up at the Midwest Classic … National qualifier in 2019 after finishing as regional runner-up, then placed fourth in 2020 and ’21 to just miss out on advancing … Owns 64-29 career record.

149 Brik Filippo, Jr. – Ranked No. 1 with 22-2 record, including nine bonus wins (four majors, three falls, two tech falls) … Is riding a nine-match winning streak and should be seeded first in the regional … Has 17-1 record against Division II competition, including 4-1 mark vs. ranked opponents … Won the Dan Harris Open to start the season and was runner-up at both the Lindenwood Open and Midwest Classic … Just missed national tournament berth with fourth-place regional finish in 2019, then took third the next year to qualify before international pandemic canceled the national meet … Has 65-19 career record.

157 Ty Lucas, Jr. – Has 16-2 record with seven bonus wins (four majors, three tech falls) … Ranked sixth and should be seeded second this weekend … Lindenwood Open champion this season … Is 11-2 against Division II opponents, including 1-2 vs. ranked foes … Defending regional champion, beating Fort Hays State’s Anthony Scantlin 5-2 for the title … Placed fifth at national tournament to earn All-America honors for second straight year … Took sixth at regional in 2019, then was runner-up in ’20 and was named an All-American by the NWCA after the national tournament was canceled … Has 63-19 career record.

165 Hunter Jump, RS Fr. – Ranked 11th and is 19-5 with eight bonus wins (six falls, two majors) … Will probably be seeded fifth in loaded regional that features five nationally ranked individuals … Captured titles in the Viking and Jet opens, was runner-up in the freshman-sophomore division of the Lindenwood Open and took fourth at the Dan Harris Open … Has 9-5 record against Division II competition, including 1-3 vs. ranked opponents.

174 Alex Kauffman, Jr. – Making his debut at this weight and will probably be seeded third or fourth in the regional … Has team-high 24 wins and is 24-4 with 13 bonus wins (eight falls, five majors), with all but one of those matches at 184 … Won titles at the Dan Harris and Golden Norsemen opens while finishing third at the Viking and Lindenwood opens and the Midwest Classic … Went 5-1 at the Midwest, beating two ranked opponents while filling in for injured Heath Gray … Has 13-3 record against Division II competition, including 2-3 mark vs. ranked foes … Lost 5-1 decision to No. 2 Noah Ryan of St. Cloud State in only match at 197 … Junior college All-American at Northeastern Oklahoma A&M.

184 Heath Gray, Sr. – Defending national champion looking to become just the third four-time regional champion in school history … Ranked second and should be seeded first in the regional … Missed significant part of the season after suffering early injury and is 9-1 with six bonus wins (five majors, one tech fall) … Lost 3-2 decision to Nebraska-Kearney’s Billy Higgins in his last outing, which ended a 50-match winning streak that ranks as the second-longest at UCO … Is 8-1 against Division II competition, including 1-1 vs. ranked opponents … Placed sixth in regional at 174 in 2017 while at Newman before transferring to UCO … Regional champion and third-place national finisher in 2019 … Took regional title again the next season and was named Division II Wrestler of the Year and an All-American by the NWCA after the national tournament was canceled … Captured third regional crown last year with 4-1 finals victory over McKendree’s Dan Filipek en route to national title … Owns best career winning percentage at UCO with 87-4 record (95.6) that includes 57 bonus wins … Has 112-17 career collegiate record.

197 Dalton Abney, So. – Ranked No. 1 and should be seeded first this weekend … Unbeaten at 19-0 and has 11 bonus wins (eight falls, three majors) … Has 16-0 record vs. Division II opponents, including 4-0 against ranked foes … Won Midwest Classic crown in only regular season tournament, with his finals win clinching the team title for UCO … Two-time regional runner-up, falling in the finals in both 2020 and ’21 to McKendree’s Ryan Vasbinder … Named All-American by the NWCA in 2020 after the national tournament was canceled and national runner-up last year, dropping 1-0 finals decision to Vasbinder … Owns 42-4 career record, including 24 bonus wins (18 falls, five majors, one tech fall).

Hvy Shawn Streck, So. – Joined the Bronchos at the semester break and has had an immediate impact in limited action … Is ranked fifth and should be seeded second in the regional … Just 6-0 for the season, having scored three falls and one major … All six wins are over Division II opponents, including one against a ranked foe … Won 30 matches and was Division I national qualifier at Purdue in 2018 as a redshirt freshman … Hadn’t competed since until coming to UCO.