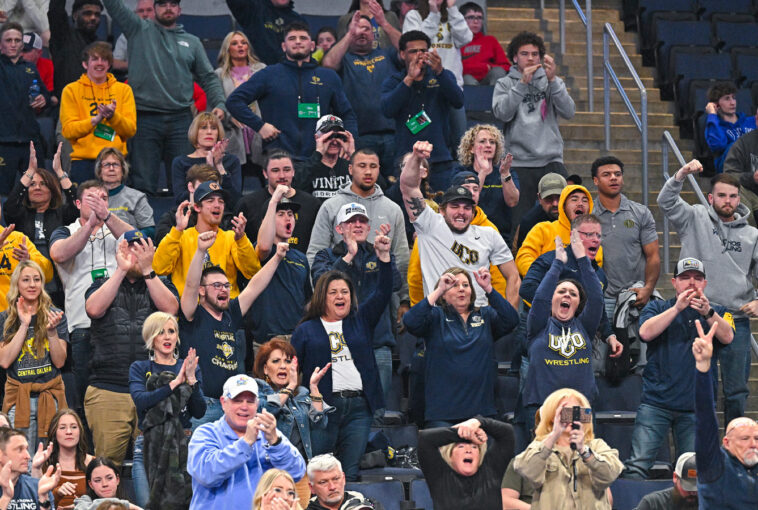 Morris (125), Lucas (133) and DesVigne (174) led the way for the Bronchos in the huge one-day tournament that attracted nearly 500 entries. UCO also got a third-place effort from 157 Gabe Johnson, while 149 Brik Filippo took fourth, 141 Nate Keim fifth and 125 Garrett Steidley and 165 Ty Lucas sixth in the open division.

UCO had a pair of top-four finishers at 141 in the freshman-sophomore division as Ryder Ramsey came in second and Josh Taylor fourth while 184 Kohner Gallagher was third.

The Bronchos also had three unattached entries place in the top six of the freshman-sophomore division, led by Garrett Wells’ championship effort at 184 pounds. Bam West was runner-up at 149 and Guy Clevenger fifth at 125.

“We looked like we did last year at the national tournament,” head coach Todd Steidley said. “We need to do a better job of dealing with adversity and that starts with me and the way we practice.

“There were some good things that happened, but we’ve got a lot of work to do. We need to get tougher mentally and stop giving our opponents so  much respect.”

Morris made the finals with a pair of hard-fought decisions following a first-round bye, clipping Jayden Carson of Division I Arkansas-Little Rock 4-3 before using a takedown in sudden victory to upset Division II’s seventh-ranked Christian Mejia of McKendree 3-1.

The junior suffered his first loss after a 9-0 start to the season with a 3-1 sudden-victory setback to Oklahoma State’s Zach Blankenship.

Lucas also lost for the first time after opening the year 8-0, dropping a wild 12-10 finals decision to OSU’s Reece Witcraft.

The sophomore drew an opening-round bye before winning methodical 8-2 and 6-2 decisions to move into the title bout.

The junior fell in the finals to Maryville’s 12th-ranked Bret Heil.

Filippo lost to a pair of Division I opponents in finishing fourth.

Ramsey opened the tournament with a major decision and second-period fall, then prevailed 1-0 in a tight quarterfinal battle before breezing to 9-3 semifinal victory.

Gallagher went 5-1 on the day, winning two sudden-victory matches in making the semifinals before falling in another overtime bout. He rebounded with two consolation victories to claim third.

Wells wasn’t tested in rolling to the title. The redshirting freshman had two first-period falls, a 17-2 technical fall and easy 9-2 win in marching into the finals before capping his perfect 5-0 day with a first-period fall.

West had no trouble making the gold medal match, following a first-round major decision with back-to-back falls. He lost a tough 3-2 decision in the finals to Iowa’s Joel Jesuroga.

The Bronchos will be off next week before resuming the dual schedule Dec. 2 at home against Ouachita Baptist.