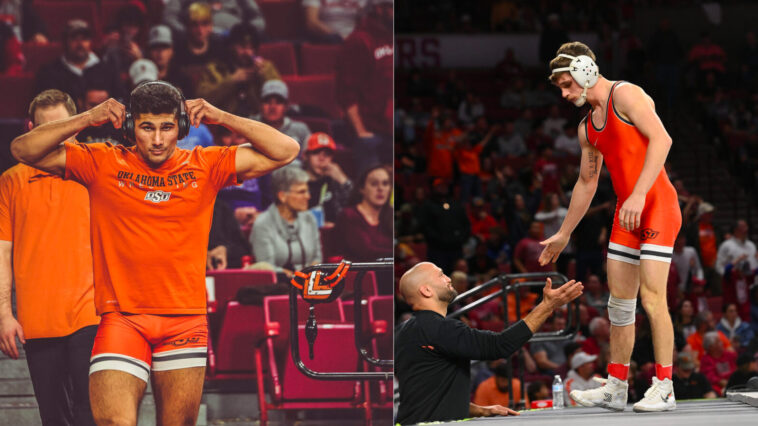 In OSU’s first dual of the day, the Cowboys wrestled to impress and secured a shutout. They scored the first takedown in every match and racked up over three minutes of riding time multiple times. I was worried about altitude affecting some of the OSU wrestlers, but the Falcons seemed to be the ones with more issues through the dual. Unfortunately, Air Force didn’t send out their ranked starters, so fans didn’t get to see any significant matches. This was a good dual for the Cowboys to get some confidence and get used to the altitude before facing Wyoming later in the day.

Mastrogiovanni came out aggressive and quickly racked up three takedowns, a four point turn, and 3:32 of riding time. It looked like he was well on his way to a tech until a tough rideout from Melofchik for the whole third period. Mastrogiovanni was never in any danger on bottom, but his struggle to get away was surprising after looking much improved this season. After a hard mat return on the edge, Mastrogiovanni got up wincing and grabbing his ribs. It appeared to be bothering him badly, as even when he got into the referee’s position, he took an extra second to grab at them and was bent over after the match. Mastrogiovanni ended up wrestling against Wyoming with no issue, so it doesn’t seem to be anything to worry about long term.

Jared Van Fleet did not start here, so former starter Flores went to the mat today. Fix kept his pin streak going, tying his previous career record of three in a row. After getting the first takedown, Fix went cut and release but almost immediately got back on top. From there, Fix got to some turns and eventually got Flores to his back for the pin in a dominant performance.