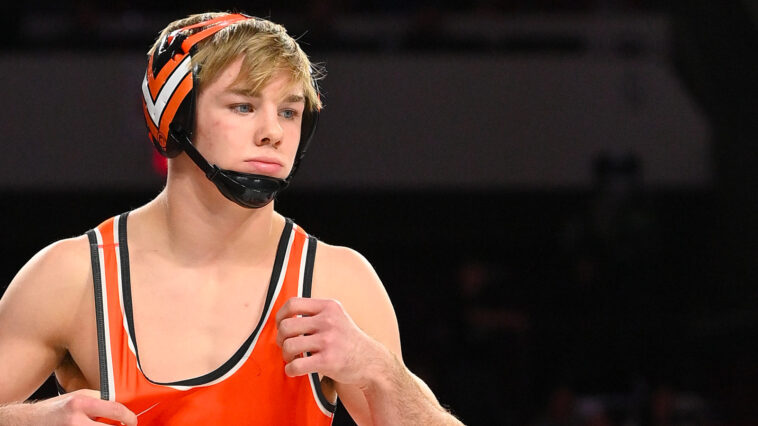 Oklahoma State scored another Bedlam win to complete the 2022 season sweep, but the score was much closer against a banged-up Cowboy team. OSU’s Wyatt Sheets and Travis Wittlake were both out for this dual. The two teams split matches, but OSU pulled away with three major decisions to OU’s one. Both teams found upset matches, with OSU getting a win at heavyweight and OU winning big ones at 184 and 125. OU had a chance and came close at 174 and 285, but OSU wrestlers persevered and gutted out a close win against their rival.

Of note, Gfeller was honored at senior night despite having a year of eligibility left so this spot may be taken by one of the redshirt blue chips OSU has in waiting. For this match though, Gfeller was able to take a one-sided decision into bonus points with a late move. Gfeller dominated this match in ties, running McDougald out of bounds with his underhook for three stall calls in the first period and an early 2-0 lead. In the second McDougald did score a big reversal, but Gfeller was able to escape and score a takedown of his own to end the period. The third period saw another Gfeller escape to take a 7-2 lead, and it appeared that he was on his way to a strong 6-2 decision. However, with short time left McDougald went for a big trip on the edge but lost position to Gfeller who put McDougald on his back for a six-point move and the major decision.

With no Sheets, Manibog got his first start of the season. It doesn’t sound like Sheets is at risk of missing the post season, but the short turnaround after Bucknell was a tough comeback. Thomas won a one-sided decision, but OU fans will feel frustrated with some lack of urgency towards the end. Thomas scored three takedowns plus an escape, stall point, and riding time point. However, it felt like with short time he could have pushed harder for one more takedown to lock up the major which could have made the score even closer. With Sheets also being celebrated on senior night, time will tell who ends up getting the start here in the future.

Wittlake missed his third dual of the season after injuring his knee against Bucknell, and it sounds like he may be at risk of missing Big 12’s. Per O’Colly news, Coach Smith said on his radio show “Serious enough injury right now that we’ll have to see. We’ve got two weeks, so it’s not something we need to decide now.” If Wittlake was forced to miss the post season that would be a significant point scorer lost as he is likely OSU’s second-best chance at an All-American. With Harper starting he looked solid but couldn’t do much against former qualifier Grello. After a scoreless first Grello scored a reversal in the second followed by a full third period ride out for the decision win.

This match ended much tighter than the first match, and at one point did appear that Mantanona may have scored a late takedown, but the call was not overturned. Mantanona actually scored the first takedown but was unable to keep Plott down for long in the first period. In the second Plott responded with an escape and a late takedown of his own to take a 4-2 lead going into the third period. From there Mantanona scored an escape to make it 4-3, and then quite a few scrambles occurred. Plott was the more active wrestler, but when he got to legs felt Mantanona threatening an elevator repeatedly and worked for the stalemate. With 40 seconds left a scramble occurred with both guys threatening to score from the neutral danger position, but it appeared at one point that Mantanona caught Plott with his leg to put him in the danger position. The ref swiped twice but did not call the takedown and Plott won 4-3. Coach Roselli challenged but the call wasn’t changed. For OU fans, it’s exciting to see Mantanona challenge a high-level wrestler like Plott, but this match was a huge loss in terms of the dual. For OSU fans I think it’s fair to have some worries with Plott, who isn’t separating as much as he did earlier in the season. Either way both guys will have two weeks to adjust before quite possibly meeting again at Big 12’s.

While I thought Moore would go and give Geer a tough match, I did not expect the upset, especially how it happened. Moore scored four takedowns to Geer’s zero, and they all pretty much came the same way. Geer shot for a leg and Moore simply sprawled and hit easy go behinds. I think Geer struggled with Moore’s strength in ties and rushed some shots at times, but Geer never came too close to scoring. The third period saw Geer make some adjustments in his setups but still couldn’t score. While Moore spent two years at OSU to start his career, him and Geer were never actually teammates. Moore will likely be the starter for OU going forward and could end up stealing a qualifying spot for NCAA’s. Geer has been mostly consistent this season, so I didn’t expect an upset like this here, and is likely going to be a hit to his seed.

Stika has wrestled tough all season, but Woodley was aggressive throughout and dominated this match to get the major. Woodley scored five total takedowns plus an escape, riding time, and stall point. Stika had good defense early but Woodley’s strength was apparent as he was able to pull his leg in to finish multiple times. Stika is likely going to be the starter for Big 12’s, and OSU may go from a national champ here to missing qualifying the weight.

Surber avenged an early season loss with a very exciting heavyweight match. A scoreless first period saw a lot of hard hand fighting and exciting scrambles at a high pace. Both wrestlers took multiple shots and came close on the edge repeatedly. The second period saw Surber escape quick then score off Heindselman’s shot after both wrestlers attempted multiple roll throughs. Surber couldn’t keep him down for long though, and it was a 3-1 match going into the third. The third period saw more scrambles for both wrestlers, and Surber came close to scoring again. Surber showed a lot of improvement in all three positions against a bigger wrestler and was able to use Heindselman’s size to his advantage as he allowed him to rush before shooting in and getting in deep multiple times. While Heindselman is not the highest ranked wrestler, Surber showed the adjustments and continued improvement he’s made to avenge a loss. This was huge for the dual as well as OU lead 13-7 at this point and appeared that they may had momentum going into the last four matches.

This match looked like Mastrogiovanni may still be banged up as he was limping a few times. A scoreless first period didn’t see too many committed attacks from either wrestler. In the second period Prata scored a quick escape and it looked like the first period with few shots. In the third period with Prata on top he rode Mastrogiovanni long enough for the riding time point, and after Mastrogiovanni got away Prata scored the matches only takedown. While Mastrogiovanni wasn’t 100% for this match it was disappointing to see him continue to struggle in the same positions. For Prata it shows that he can be dangerous if he is able to wrestle his style of match, and his experience can win him matches. For Mastrogiovanni he’ll have just under two weeks to get healthy and improve from bottom.

Fix came out knowing he needed some bonus points, and he pushed Madrigal the whole match. Madrigal made some adjustments and wrestled from the edge throughout the match, often staying just offensive enough to avoid being called. Fix stayed on him throughout though, and scored four takedowns, a reversal, a stall point, and a riding time point for the major. Madrigal scrambled well at times but could not keep up with Fix’s chain wrestling. Madrigal did look healthy though and could end up seeing Fix again in the Big 12 finals if he can go on another run like last year. The major ended up meaning that a Young win would mean a win for OSU instead of a tie.

Young knew he just needed a decision to get the win but decided that wasn’t enough and pushed for the major himself. Young scored five takedowns plus a riding time point to get the major. Butler had no answer for Young in neutral and struggled in hand fights and scrambles. Young showed off some solid top wrestling as well as he kept Butler down at times. While Butler is not the toughest opponent, Young improved on the score from the last match (9-4) and showed that he is making significant strides. If he can keep improving, then I wouldn’t be surprised to see him start scoring some postseason upsets.

I expected that both teams would win five matches, but not the five that ended up happening. OU was helped by some injuries to the Cowboys, but still missed out on their opportunity at an upset. Both teams should walk away feeling encouragement from certain matches. OSU scored impressive wins at 149, 285, and 141. That combination of youth and experience could end up proving vital with the injuries the team currently has. OU had big upsets at 184 and 125 but will be feeling frustrated that they missed out on one at 174. This team took a big hit after losing Dom Demas and Mitch Moore early but have some key wrestlers that could be looking to score some upsets of their own in the post season. While neither team is favorited to repeat as champs this year, they both have wrestlers that should make some noise, and if the right guys get hot could challenge for the conference title again.