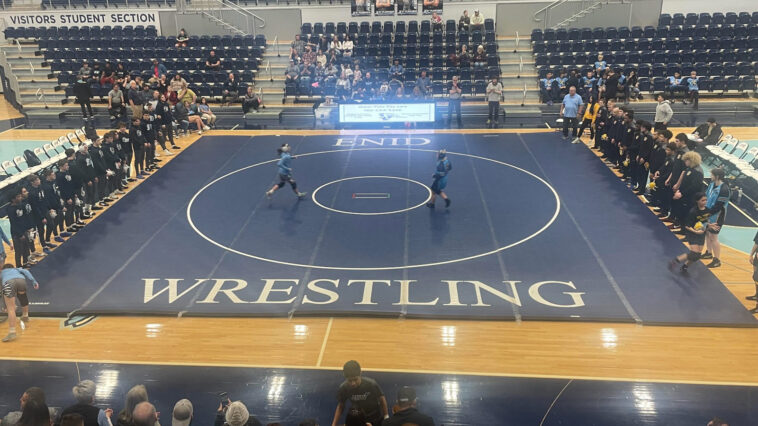 If you like pins, the Enid High School Competition Gym was the place to be Tuesday night. On their way to a 67-12 victory over the Putnam City West Patriots, the Enid High Plainsmen had nine pins (PCW had one), and only two of 14 matches went the distance.

It was also Senior night, where four Plainsmen Seniors (Carlos Alvarado, Leslie Fortner, Seth Melvin, Hector Perez) were honored for their contributions to the team in their final year of HS wrestling.

The dual between 6A rivals started off with Enid’s Fred Latdrik wrestling Aiden Hall.

The two lightweights battled it out in the first, with Latdrik getting the first TD, but Hall was able to get a reversal to tie the score, however shortly before the period ended, Latdrik got his own reverse to go up 4-2 headed into the 2nd.

The points were flying in the second period with Latdrik getting two quick takedowns before rolling Hall on his back for a pin in 3:08, which got the Plainsmen off to a great start and a 6-0 lead.