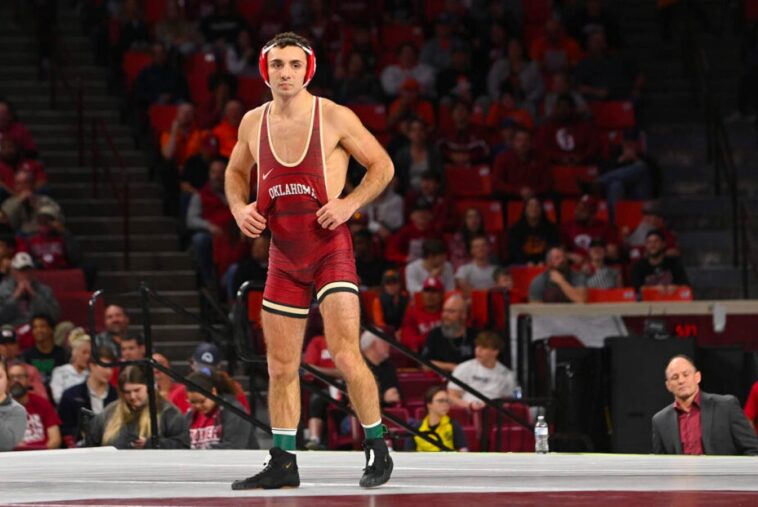 OU has announced a streaming agreement with ESPN+.

Moving forward all OU home wrestling meets will be streamed on ESPN+.

NORMAN — ESPN+ and the University of Oklahoma announced today a multi-year agreement for SoonerVision on ESPN+ that will include more than 100 annual live events, studio programming and archival content. ESPN+ will stream one regular season college football game and the annual Oklahoma spring football game, as well as more than 100 additional competitions across men’s and women’s basketball and varsity Olympic sports, including Oklahoma’s NCAA champion women’s gymnastics and softball programs. On top of live game programming, SoonerVisionon ESPN+ will also include classic content, coaches shows, pro days, pregame shows and more.

“Given the overwhelming size and passion of the Sooners fan base, we are thrilled that ESPN+ is partnering with Oklahoma to create SoonerVision on ESPN+, the most expansive agreement ESPN+ has with an individual university athletics program,” said OU Vice President and Athletics Director Joe Castiglione. “SoonerVision on ESPN+ builds upon our previous media successes by offering over 1,000 hours annually of live OU sports events and other programming to ESPN+’s growing subscriber base of more than 21.3 million. As a result, OU fans will now have an easily accessible year-round media home on all their screens.”

“The University of Oklahoma is home to one of the premier athletic departments in the country and we look forward to presenting a wide variety of men’s and women’s sports on SoonerVisionon ESPN+ to fans across the country,” said Nick Dawson, Vice President, Programming & Acquisitions, ESPN. “From live events to historic games and studio programming, Sooners fans will be able to access all of the content they love via their favorite connected devices.”

Beginning in August, content will be available on ESPN+ via a SoonerVision landing page, with live events starting at the onset of the fall athletics season. Combined with the Oklahoma games televised on ESPN’s linear channels with TV Everywhere authentication, the ESPN App is one convenient destination to access Sooners sports.

Information regarding access to Oklahoma athletics live events and content outside the U.S. will be announced forthcoming.

About ESPN+
ESPN+ is the industry-leading sports streaming service that offers fans in the U.S. thousands of live sports events, original programming not available on ESPN’s linear TV or digital networks and exclusive editorial content from dozens of ESPN writers and reporters. Launched in April 2018, ESPN+ has grown to more than 21.3 million subscribers.

Fans sign up to ESPN+ for just $6.99 a month (or $69.99 per year) at ESPN.com, ESPNplus.com or on the ESPN App (mobile and connected devices). It is also available as part of The Disney Bundle that gives subscribers access to Disney+, ESPN+ and Hulu for $13.99/month (Hulu w/ads) or $19.99/month (Hulu w/o ads). Subscribers to Hulu + Live TV also receive ESPN+ at no additional cost.

About SoonerVision
SoonerVision is the in-house video production arm of OU Athletics, serving in-venue, digital media, studio and live game broadcast productions. Over the past decade, SoonerVision has produced over 700 live game events. With an extensive archive of media dating back to the early 1940s, the University of Oklahoma was the first school in the country to produce a weekly coach’s show when former OU head football coach Bud Wilkinson began taping a show in 1953. An OU staple for nearly 70 years, the program will continue this fall as “Sooner Football with Brent Venables” debuts on ESPN+.

About University of Oklahoma Athletics
The University of Oklahoma Department of Intercollegiate Athletics sponsors 21 varsity sports programs (nearly 600 student-athletes) that compete at the NCAA Division I level. OU’s athletics programs have combined for 40 all-time NCAA team championships, with 21 of those coming under 24th-year Director of Athletics Joe Castiglione and with 14 earned since the start of the 2012-13 academic year. The sport of football has won seven national championships, produced a nation-leading 50 all-time conference titles and is tied for the all-time lead with seven Heisman Trophy winners and five No. 1 overall NFL Draft picks. OU student-athletes have won 13 male or female Big 12 Conference Athlete of the Year honors in the league’s first 24 years, including nine such accolades over the last eight years. Living up to its “Inspiring Champions Today, Preparing Leaders for Tomorrow” mantra, OU Athletics also boasts a track record of excellence outside of athletics competition. Student-athletes have registered a cumulative GPA of 3.0 or higher each of the last 20 semesters, including a department-record 3.19 figure during both the spring 2021 and fall 2021 terms.

When will Oklahoma programming begin to appear on ESPN+?
SoonerVision on ESPN+ will begin in August 2022.

What will I get with my ESPN + subscription?

Do I need a cable subscription for ESPN+?
ESPN+ does not require a cable subscription or long-term contract. Fans sign up to ESPN+ for just $6.99 a month (or $69.99 per year) at ESPN.com, ESPNplus.com or on the ESPN App (mobile and connected devices). It is also available as part of The Disney Bundle that gives subscribers access to Disney+, ESPN+ and Hulu for $13.99/month (Hulu w/ads) or $19.99/month (Hulu w/o ads). Subscribers to Hulu + Live TV also receive ESPN+ at no additional cost. Fans can subscribe and start streaming instantly on connected TVs, tablets, laptops, phones, or other supported devices.  ESPN’s linear channels (ABC, ESPN, ESPN2, ESPNU, ESPNews) and ESPN3 still require TV Everywhere credentials (cable authentication) to watch.

Is ESPN+ a part of the Disney Bundle?
Yes! Bundle subscribers can get the full ESPN+ experience, the best stories in the world
with Disney+, and your favorite TV episodes from Hulu (ad-supported) all for just $13.99/month.

Are ESPN and ESPN+ the same?
No, both products live within the same app but are authenticated differently. Events that appear on ESPN’s linear channels (ABC, ESPN, ESPN2, ESPNU, ESPNews) and ESPN3 require TV Everywhere credentials to watch.

Can fans watch multiple ESPN+ streams at the same time?
Yes, you can access three streams from ESPN+ at any one time.

Where can fans find more information about ESPN+?
plus.espn.com

Does this mean all OU games will be on ESPN+?
No. Athletics events that have traditionally appeared on ESPN’s linear channels (ABC, ESPN, ESPN2, ESPNU, ESPNEWS) OR FOX’s linear channels (FOX, FS1) will continue be, as the TV network selections for first- and second-tier rights remain the same as they have in recent years. ESPN and FOX Sports will make their selections of football, basketball and Olympic-sport programming to be shown on their linear channels, and OU events that are not chosen in the first- or second-tier selection process will then be made available to appear on ESPN+.

If I am a current subscriber to SoonerSports.tv, what does this mean for me?
All current SoonerSports.tv subscriptions will remain active with premium content available through June 30, 2022. Current subscribers do not need to reach out to cancel, as we will take care of that for you. We will be in touch with direct communication closer to June 30 to confirm your account has been turned off and that no additional charges will follow. Also, more information will be released shortly as to what video content will be available via SoonerSports.tv beyond July 1, 2022.