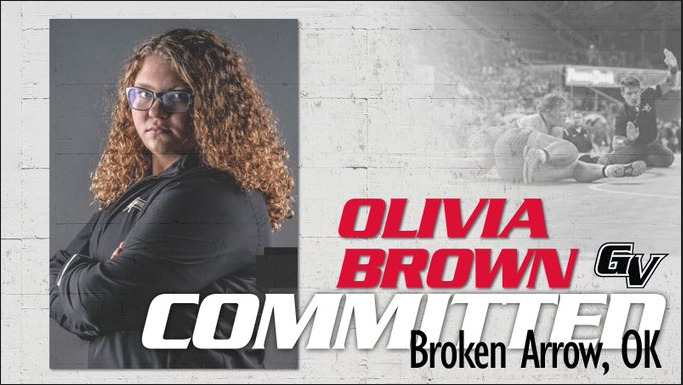 Just one day after it was announced that Tate Picklo was named the Dave Schultz Central Region Award Winner, the National Wrestling Hall of Fame announced Broken Arrow’s Olivia Brown as the Central Region winner of the Tricia Saunders High School Excellence Award.

The award recognizes and celebrates the nation’s most outstanding high school senior female wrestlers for their excellence in wrestling, scholastic achievement, citizenship, and community service.

Olivia Brown of Broken Arrow, Oklahoma, was an Oklahoma state girls champion in 2021 and 2020 for Broken Arrow High School. The top-ranked 200-pound wrestler in the National Girls High School Rankings, she will continue her wrestling career at Grand View University. The daughter of Michael T. Brown and Suzanne M. Caruso, she was Miss Wrestling Oklahoma in 2021 and the Joey Miller Wrestler of the Year in 2020. She was a National Cadet champion in freestyle and folkstyle in 2018 and 2019. Brown finished second at the Folkstyle Nationals in 2019 and fourth in 2018 while finishing third at Freestyle Nationals in 2019 and seventh in 2018. Brown received the John and Jonna Cockrell Award of Excellence in 2020 and was also named Most Valuable Junior Wrestler for Broken Arrow in 2020. She was Wrestler of the Year at Holland Hall in 2018. She was team captain for Broken Arrow from 2019 to 2021 after being team captain at Holland Hall from 2017 to 2019. Brown also lettered in softball two years and in track for one year at Holland Hall. A National Honor Society officer, Brown was AP English Student of the Year in 2019-20 and Magna Cum Laude in 2018-19 and Maxima Cum Laude in 2017-18 for the National Latin Examination. She has volunteered at Bright Spot Mobile Family Services since 2017 and served on the Diversity and Inclusivity Council at Holland Hall. Brown placed second in Business Law and Ethics, sixth in Entrepreneurship and seventh in Quick Service Restaurant Management at the Oklahoma D.E.C.A. competition.

The national winner of the TSHSEA will be announced on August 11.