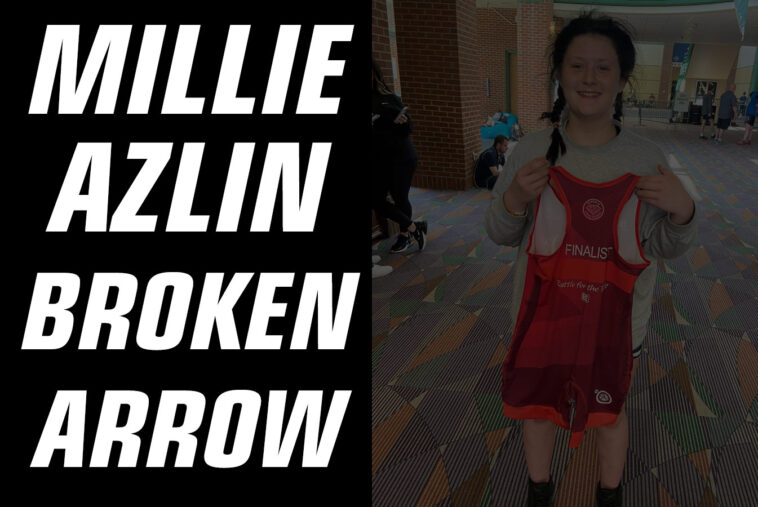 The 13-year-old from Broken Arrow recently became the first Oklahoma girl to make the finals in the Super 32 Tournament in Greensboro, N.C.

Azlin, an eighth grader, finished at the runner-up in her weight bracket with mostly high school girls.

“Of course I was nervous, it was Super32, the best high school girls is the nation,” Azlin said. “It was super exciting. I just wanted to place so I could do early entry next year and ended up in the finals! I got early entry and a singlet.”

Azlin is currently one of four eighth graders ranked nationally among high school girls, checking in at 18 in the 164-pound class.

She showed her meddle in the tournament by knocking off top-seeded Ella Nichols, 10-6. The Connecticut. wrestler was ranked No. 4 in the nation at 152 in the preseason national girls high school rankings last month. Azlin noted the match against Nichols was her most memorable of the tournament.

In the finals, Azlin lost a close on to West Virginia’s Kaylie Hall, 4-3. Hall is a top 25-ranked wrestler.

Azlin, a 2021 junior high school state champion, is currently wrestling for the Team Tulsa Wrestling Club. The Super 32 tournament was just another big-time event for the Oklahoman who also attended the World Team Trials and Preseason Nationals.

She hopes to make a World Team in the future and to compete at Fargo in the summer of 2022.

“Wrestling is my escape,” she said. “It’s all about me and what I want to do.”

She started wrestling just four years ago and it kind of occurred by happenstance. Azlin was at her brother’s wrestling practice often and had to sit and watch. But when she saw other girls wrestling, it piqued her interest.

She decided to try and she has picked up the sport well. So far, she has won two Junior Open Championships and three Oklahoma Wrestling Association youth state championships.