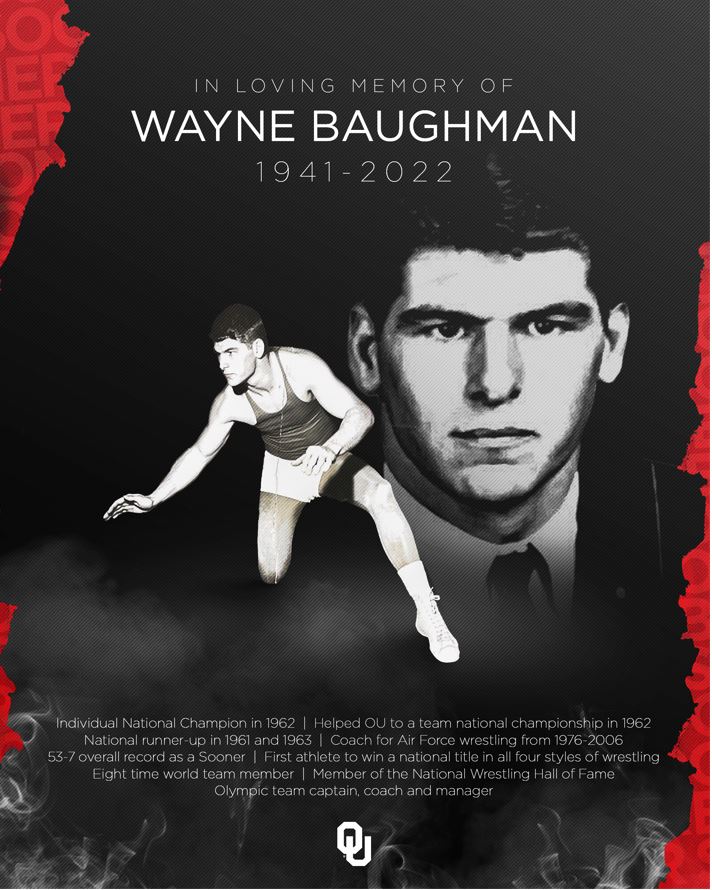 From the National Wrestling Hall of Fame-Stillwater, OK

Wayne Baughman, a Distinguished Member inducted into the National Wrestling Hall of Fame in 1982, passed away on Wednesday, at the age of 81.

“We are extremely saddened to hear about the passing of Wayne Baughman, one of our nation’s greatest wrestling legends. On behalf of the National Wrestling Hall of Fame Board of Governors and staff, I want to express our sincere sympathies to his wife, Betty, and his family and all of his former teammates, assistant coaches and student athletes,” said Lee Roy Smith, Executive Director of the National Wrestling Hall of Fame. “Over the last six decades, Wayne’s impact as a wrestler, coach, military officer, historian, author and volunteer stretched far and wide across the country, providing him a platform to shape and inspire many.”

Baughman’s funeral service will be Saturday, March 12 at Crossroads Chapel, 840 North Gate Blvd, Colorado Springs, Colorado 80921. The service will commence at 1:30 p.m. MT. At the request of the Baughman family, in lieu of cards or flowers, please consider a gift to the Wayne Baughman Wrestling Program Endowment at https://bit.ly/3sO5nG8

“Even with all of his success and accolades as an athlete and coach, Wayne would often describe himself as someone who was awkward, clumsy and slow. He exemplified overcoming one’s limitations with dedication and hard work,” Smith added. “He loved the National Wrestling Hall of Fame and everything it stands for. For decades he served as a member of our Distinguished Members selection committee and regularly attended our annual Honors Weekend. Wayne demonstrated a grateful passion for a sport that helped him find a path to success in life that during his youth he never dreamed was possible.”

“Few men in the history of our sport have had a more profound impact on wrestling than Coach Baughman. Involved in every aspect of the sport, Wayne has impacted countless wrestlers and wrestling organizations. His legacy is seen today all over the sport,” said Rich Bender, Executive Director of USA Wrestling. “He was a man with incredible drive, determination, and toughness, yet always willing to lend a hand to those that shared his passion for our great sport. Wrestling has lost a true legend.

“Our thoughts and prayers go out to his beautiful wife and lifelong partner Betty, the entire Baughman Family and the thousands of members of the worldwide wrestling family that Wayne has impacted.”

As a high school wrestler, Baughman’s best finish was third in the state. But he went on to compete in 25 national tournaments and placed as low as third only twice.

He won 16 national championships, was runner-up seven times, and became the first athlete to win a national title in each of four recognized styles of wrestling – folkstyle, freestyle, Greco-Roman and Sombo.

At the University of Oklahoma, he sandwiched the 1962 NCAA crown between a pair of runner-up efforts. But during his career as an Air Force officer, his wrestling success soared to unparalleled heights.

He won five national championships in Freestyle, nine in Greco-Roman and one in Sombo. He won eight world-wide Air Force trophies and 15 Interservice titles. He captured the Freestyle gold medal in the Pan American Games of 1967 and was a member of three Olympic teams and eight World teams. He was a place winner in Olympic or World competition in all three international styles. He served as captain of two Olympic teams, coach of another, manager of yet another. Five times he coached U.S. wrestlers in the World Championships.

Through a combination of ability, determination and self-discipline, Wayne Baughman reaped a rich harvest in the fields of wrestling. And throughout his career he worked with equal diligence to plow those same values back into the sport. He was largely responsible for keeping the U.S. Air Force active in wrestling, and he coached service teams in eight years of international competition before becoming head coach at the Air Force Academy in 1975.

Baughman received the Alan Rice Leadership Award from the National Wrestling Hall of Fame Dan Gable Museum’s Alan and Gloria Rice Greco-Roman Hall of Champions in 2012 and is also a member of the Helms-US Savings Hall of Fame and the Oklahoma Sports Hall of Fame.

As a wrestler and as a coach, he was an ambassador for the sport, visiting many junior and senior high schools to stress the importance of academics as a part of athletic success.

He was a legend in the sports community in his long-time home, Colorado Springs, Colorado, known as Olympic City USA. He was elected in 2012 to the Colorado Springs Sports Hall of Fame, not just for his coaching ability and leadership in wrestling, but for his other pursuits, such as mountain climbing, ultra-marathons and other extreme sports. It has been reported that Baughman climbed and ran 28 of the 54 mountains over 14,000 feet in Colorado while also competing in 100-mile bike competitions. He was active with USA Wrestling, which is located in Colorado Springs, and was in attendance at numerous wrestling events of all levels in the community. He was also a successful book author, and regularly had his writings appear in a variety of publications.