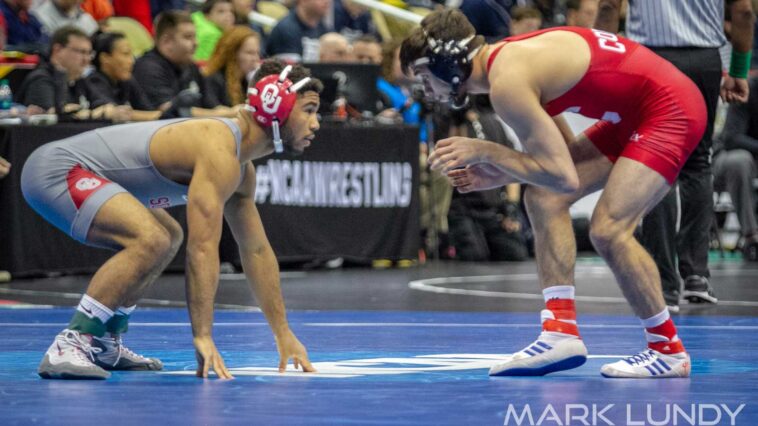 In a turn of events that is likely shocking to most of my regular readers over at Pistols Firing and FloWrestling, I will be doing some writing on the Oklahoma Sooners this season. I wanted to start things out with a list of five things that should excite most Oklahoma fans heading into the 2020-2021 wrestling season.

The Sooners have struggled a bit in the HWT department in recent years. It’s been since 2017 since OU had an NCAA qualifier at 285 and every year from that 2017 season until this year, their starter has finished the season with a losing record. As a fanbase that can be a little difficult to handle, to close out the final bout of most duals with a loss is not the most enjoyable thing.

That shouldn’t be the case this year as the Sooners have a young star that looks as though he may be the best heavyweight they’ve seen in some time. Josh Heindselman was a two-time Oklahoma state champion out of Piedmont and has been impressive early on in his college career. He had a solid start going 16-6 as a true freshman, then what has arguably been the most impressive thing for him is his freestyle offseason.

Heindselman had a run through his Junior National bracket that was impressive. He outscored his opponents 51-13. Both his round of 32 and quarterfinal bouts were ended early as Heindselman won both matches via tech fall, 10-0 and 12-2 respectively. He then knocked off South Dakota State’s Spencer Trenary, 12-5 in the semifinal match. In his final match with Virginia Tech’s Hunter Catka, the Sooner dominated, defeating the Super 32 champion via 15-6 decision.

Fans should be excited about OU’s future at HWT with Heindselman.

Recruiting with OU wrestling has been kind of unique to follow recently. In the overall landscape of wrestling, they’ve done OK and landed some big names in PA, Ohio, and California. They’ve not done as well in state though.

This last few years they seem to be trending in a bit better direction at home though. Heindselman was sort of the start of it, then last year they landed Caleb Tanner out of Collinsville, who could be their starter at 125 this season if he makes the cut. And this year they signed the highest ranked recruit in the state of Oklahoma for the 2021 class with Tate Picklo.

It’s rare that OU goes head to head with Oklahoma State in an in state recruiting battle and comes out on top. They did it last year with Picklo, who currently is the highest ranked prospect in the state of Oklahoma for that class at #24 on FloWrestling’s 2021 big board. They’ve also recently picked up a commitment from one of the top lower weight prospects in the state with Christian Forbes.

Ultimately, they still have missed some local kids that you would normally expect OU to land. Blake Dauphin and Gage Hockett will be at Wyoming, Harley Andrews is headed to Nebraska, and others have left the state for other colleges. OU should be landing highly ranked kids in state, that don’t end up in Stillwater. And I think it’s significant that they’ve finally landed a top in state guy in Picklo, along with a few other solid in state kids the last few years.

COVID-19 has made the sports world a quite different one. Attendance is going to be limited across the country and OU wrestles in an arena that only has a 5,000 person capacity. If you’re an OU fan in the state of Oklahoma, you have an advantage that very few wrestling program have, a TV station that produces almost all of your duals.

Even though not everyone that would like to attend duals at OU will be allowed to and wrestling even eventually could make the move to not allowing any attendees at all, OU wrestling fans will be able to watch their team on regular TV and will not be required to pay for an additional subscription beyond their standard cable fee. That’s an advantage fans of very few wrestling programs have.

The Sooners had two fairly big name transfers over the offseason that should have fans a little excited. One is Cam Picklo, Cam is the older brother of Tate and started out his college career at Cornell, ever heard of it? His transfer to OU possibly played a role in the Sooners landing Tate, but Cam himself seems to have come along a bit since high school. He had a really nice Junior tournament a few weeks ago and finished sixth at 65 KG. With Demas and Mitch Moore, they are unlikely to need to lean on Picklo anytime soon, but he’s certainly a positive addition to the room that could make an impact eventually for OU.

The blockbuster offseason pickup for OU was Mitch Moore. The Virginia Tech transfer will be a Junior this season and is projected as the starter at 149. Moore was a two-time NCAA qualifier for the Hokies and the 2019 ACC Freshman of the year. He is expected to make a big immediate impact for OU this season.

Demas is the best wrestler in the OU program over the last few years. He’s a two time All American and should enter his junior season ranked in a spot to repeat that feat. He has a lot of big throws, fun offense, and is very exciting to watch. If you’re an OU fan you’re glad to have him back and should be intrigued to follow his season and see if he can make a jump from that All-American status into a title contender.