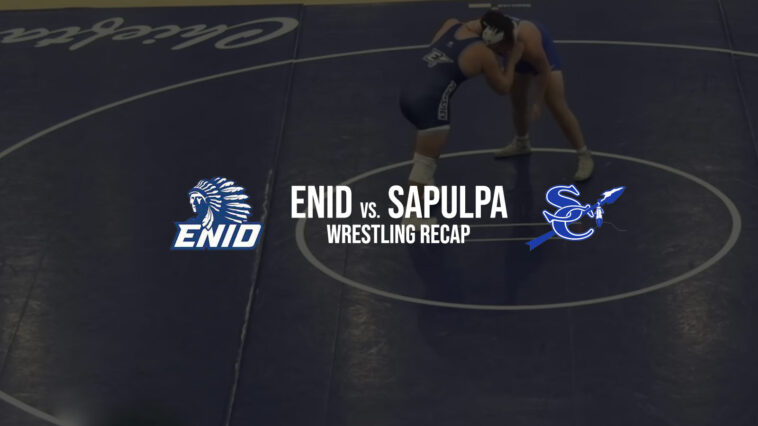 The grapplers of Enid High traveled to Sapulpa to face the 10th ranked (5A) Sapulpa Chieftains on Thursday night. Although there were three forfeits, there was a lot of exciting action, including six pins on the night, including four by Enid High.

The meet started at 106 pounds with Christian Cue vs. Enid’s Fred Latdrik. After almost securing a pin early in the first period, Latdrik put Cue on his back another time before the opening period expired. Cue returned the favor after a reversal and back points to go to the 3rd. Cue finished him off with an unorthodox move for the pin making it 6-0 Sapulpa.

Enid’s Hector Perez picked up a forfeit at 113 (which would usually be the 2nd ranked Cavin Peper from Sapulpa) to tie it up 6-6. Enid’s Peyton Zweifel faced freshman Jackson Mills from Sapulpa at 120 and threw Mills to his back in the first period and it was all Zweifel for the rest of the 1st. Mills wrestled tough the second period, avoiding being put on his back, but still being down 6-2 headed to the 3rd. Mills put on a tough ride after a takedown in the 3rd, but couldn’t get the turn, and Zweifel hung on for a 6-4 win, and a 9-6 Enid lead. At 126, Sapulpa sent out Jackson Willingham against Enid’s Vinnie Vandiver. After Vandiver got some blood cleaned up early, he got a quick takedown to go up 2-0. Willingham escaped and then got a takedown of his own to go up 3-2 going into the 2nd, where he put Vandiver on his back for the pin, and retaking the team lead for Sapulpa at 12-9.