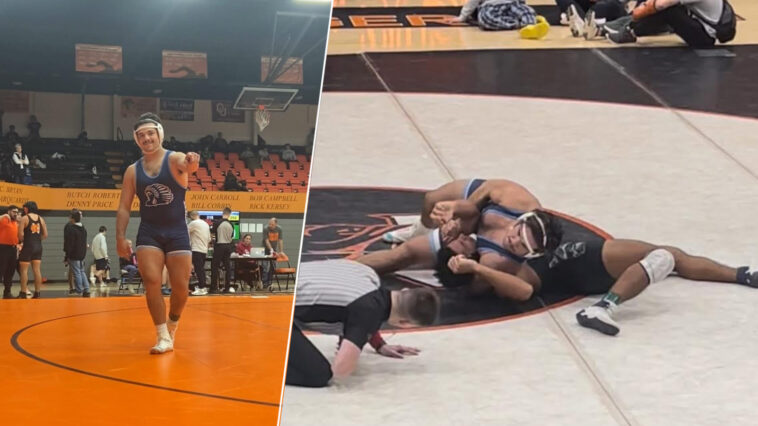 Enid High was short a few guys at the Norman High tournament Saturday due to sickness, but still found a way to pick up 3rd place in the boys division with Championships from Carlos Alvarado at 215 pounds, and Steven Brooks at 144 pounds.

Alvarado is still getting in wrestling shape, after spending the fall playing linebacker on the Enid High football team that made the second round of the playoffs.

He also only practiced one day this week as he was feeling pretty sick.

However you couldn’t tell, as he pinned his way through the pool bracket, taking out Shawnee’s Beau Skelton in 2:17, Joseph Clay from Southmoore in 1:26, and Kamden Thompson from Bishop Kelly again in 1:26.

In the Championship match, Alvarado was down 2-1 to Colter Bufford of Edmond Santa Fe after the first period, chose down to start the 2nd, escaped to tie it up, then threw Bufford to his back for the pin in 3:20.

“I felt like death before the finals match,” Carlos said, “but I have wrestled Bufford several times. I knew what was coming, was patient and waited for him to get tired in the second period. We tied up, he tried a throw and I caught it and stuck him. It was a long, but good day.”

Alvarado is 13-0 on the year, and this is his second weekend in a row winning a tournament after taking 1st at Mid America Nationals in Enid last weekend.