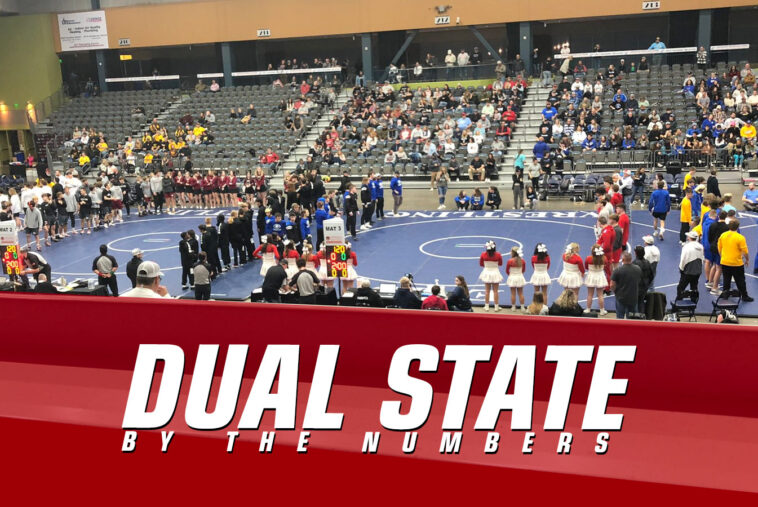 The 2022 Dual State Tournament took place over the weekend in Enid and congratulations to team champions Stillwater, Collinsville, Tuttle and Marlow!  Seth Duckworth did an incredible job covering the tournament!  He did it all, including countless social media posts, interviews with wrestlers and coaches and timely recaps of each round of action (all can be found elsewhere on Owrestle).  Now let’s take a look at the numbers and what teams were added to the Dual State Record Book.  Obviously, the most important thing is getting the W and while the records may not be that important, looking back at the history is interesting and fun.  The records do give teams some bragging rights and it is interesting to look at the records when trying comparing teams over the years.

This was the 34th Dual State Tournament with the first tournament taking place in 1989.  Team champions that first year were Del City, Shawnee, Sperry and… you guessed it – Tuttle.  And Tuttle is a good place to start as their dominating performance once again extended some of their ongoing state records or added the 2022 team numerous times to the Dual State Record Book.

2022 Dual State Records by the numbers:

Teams that moved into the Dual State Record Book (All Classes) are listed below.

Tuttle won their 19th title – Currently in 2nd place, but moving in on Perry’s 20 championships

Stillwater, Collinsville, Tuttle and Marlow all moved into the Top 10 in several categories in the State Records by Class.  Those records are listed below.

Most Points Scored in Semifinals – Stillwater: 54 (Tied for 2nd place)

Most Points Scored in Finals – Collinsville: 46 (Tied for 6th place)

Most Points Scored in First Round – Tuttle: 65 (Tied for 9th Place)

Most Points Scored in Tournament – Marlow: 173 (Tied for 5th place)

Most Points Scored in Semifinals – Marlow: 57 (Tied for 5th place)

Most Points Scored in First Round – Marlow: 71 (Tied for 8th Place)

Other Notable Performances at the Dual State Tournament

As mentioned in a previous article, this writer has compiled a book covering all of the records and results of Dual State since its beginning in 1989.  The book has not been updated with this year’s results, but anyone interested in a pdf copy of the book, please email me at [email protected].