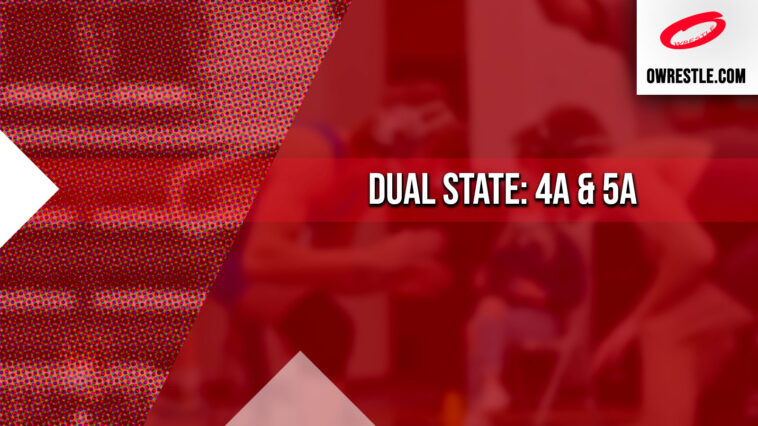 The format being used will see all of the Class 5A action completed on Friday before clearing the arena for the Class 4A tournament. The same format will be used on Saturday with Class 6A going first, followed by Class 3A. The times are for each tournament is listed below.

With the Dual State Tournament taking place two weeks after the traditional end to the season, the unknown factor is how the lineups will be affected by injuries, illness, COVID, spring sports, weight changes and a variety of other factors.

While the other teams may disagree, Collinsville and Skiatook appear to be on a collision course for another classic battle between the two rivals for the Class 5A crown. Collinsville crowned six individual champions to roll to the state championship, beating 2nd place Claremore by 78 points. Another young team, all of Collinsville’s state champions are underclassmen. Junior Drake Acklin, sophomores Clay Gates and Cole Brooks, and freshman Canon Acklin each won their first titles, while juniors Cameron Steed and Jordan Williams each completed undefeated seasons in winning their 3rd state titles. Williams went 26-0 to improve his career record to 113-1 while Steed went 26-0 to raise his career record to 104-6. The Cardinals have used their front line strength and clutch wrestling to dominate Class 5A, winning ten state championships in the past 11 years. The Dual State title has been a little more elusive as they have won five Dual State titles in the same time period with their last Dual State championship coming in 2015. Collinsville finished the season 7-0 and defeated Skiatook 33-30 in an “instant classic” on January 14.

Skiatook has a strong team as well and is looking for revenge against the Cardinals. Josh Taylor, Cougar Anderson and Hunter Hall all won state titles with Taylor and Anderson joining the exclusive four-time state champions club. Anderson is undefeated the past three years in compiling a sparkling 92-0 record and is 135-4 for his career. Taylor went undefeated this year and enters Dual State with a 109-9 career record. The Bulldogs also had six other places to finish 2nd to Tuttle in the Class 4A Tournament, but will be competing for the Class 5A Dual State championship. The Bulldogs have won the last two Class 5A Dual State titles, including a huge 32-28 win over Collinsville in last year’ finals. The two rivals, separated by only nine miles down State Highway 20, will more than likely settle the 2021 rivalry 120 miles away Friday in Enid.

Class 5A Quarterfinals
Collinsville vs. Guthrie
Duncan vs. Coweta
Glenpool vs. El Reno
Skiatook vs. Piedmont

Tuttle has dominated Class 4A for the past 11 years and appear to be set to establish a new state record for most consecutive Dual State titles (currently tied with Perry). Led by 2X state champs and 3X finalists Bryce Dauphin and Harley Andrews, state champ and 4X medalist Ashton Grounds, state champion Braden Potts, 3X finalist and 2020 champ Reese Davis, and seven other state placers, the Tigers won the 4A state title by 60 points over Skiatook. Andrews went 35-0 this year and is 79-2 for the past two seasons while Dauphin stands 71-9 the past two years. Tuttle has won 17 Dual State titles along with five runner-up finishes in 28 Dual State appearances. In the last six years, Tuttle has won their finals match by an average score of 63-7. The 2019 team established a record that can only be tied as they did not lose one individual match the entire tournament, winning by scores of 75-0, 71-0 and 63-0.

Number two seed Cushing won two regular season tournaments and outscored Skiatook to win the 4A East Regional Tournament. Cushing went undefeated in a limited dual schedule, including a 47-33 win over 3rd seeded Blanchard along with wins over 3A Dual State qualifiers Sperry and Perry. The Tigers, led by 2X champ and 3X finalist Luke Ahrberg (92-11 career record) and undefeated state champ Hayden Lemmons also have five other state placers as they look to play the spoiler to Tuttle. In fact, Cushing defeated Tuttle in back-to-back thrilling Dual State finals, winning 34-30 in 2008 and 31-30 in 2009. Those two titles were part of an impressive run by Cushing as they won six titles in a seven-year period (winning titles in 2003, 2004, 2005, 2007, 2008 and 2009).

District champion Wagoner is not competing in the Dual State Tournament which caused the bracket to be redrawn with Tuttle drawing a bye in the quarterfinals.

Class 4A Quaterfinals
Tuttle vs. Bye
Fort Gibson vs. Elgin
Blanchard vs. Weatherford
Cushing vs. Bristow

This writer has compiled a 33-page booklet of the Dual State records and all of the results since the first Dual State Tournament was held in 1989. If you would like a free copy of these records, please send an email to [email protected]