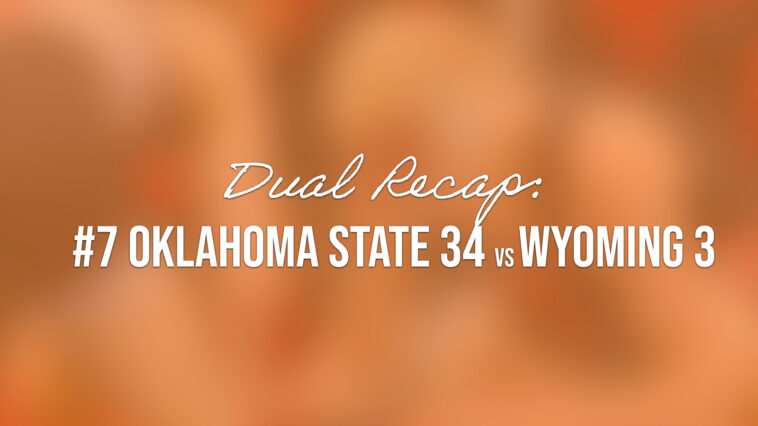 Oklahoma State kicked off their in-conference schedule against a short handed Wyoming team and came away with a dominant win at home. Wyoming started two true freshmen, but neither had success against OK State. Fix and Surber scored pins while Plott got another major to continue a strong season for each. Wyoming came to wrestle in every match and did get an upset as Carter Young took another loss early this year. There’s a break in action for the OK State Cowboys now, and they will head into their next matchup undefeated. Here are some takeaways after a strong home debut.

Wyoming didn’t have their normal lineup

With this being an in conference dual, this is an important note because if they wrestle again at conferences, the matches will have a different feel. At 125, 157, 174, 184, and 197 there are likely to be different starters in the future. Especially at 174, 184, and 197, all of Wyoming’s wrestlers that wrestled had bumped up a weight class. Plott and Surber did a good job in scoring bonus points against undersized opponents, and Wittlake came close.

Gfeller and Sheets look great where they’re at

While it sounds like at least Sheets will continue a descent towards 157, both wrestlers looked solid at their current weights. Gfeller still appears to be getting back into wrestling shape but has the skills to have success at 157lbs. Sheets now has two ranked wins at 165lbs, even though he is weighing in well under the 165lb limit. Both wrestlers will likely have a better chance to AA down at 157, but as a dual team, having the two veterans back-to-back looks like a stronger lineup overall.

After three matches, Young has a losing record, something I don’t think anyone would have expected. The matches are razor thin every time, and he’s getting out from bottom better. However, he is still struggling to finish takedowns. With a full offseason to get his size up, I don’t think that’s the issue anymore. Young occasionally puts himself in bad position and struggles to recover and finish after. He has time to put in work in the room, but he will have a big test back as he takes on returning All-American Jake Bergeland.

After how Mastro looked at the Lehigh dual, I was worried the weight cut could be catching up to him as a large 125lber. He gutted out a win there, and he showed a lot of grit in another win here. Jore Volk had wrestled at 133lbs at an open tournament, but dropped down to 125lbs to take on Mastro. A junior world champ, he challenged Mastro in neutral. It would’ve been better to see Mastro more active on the feet, but it didn’t matter in the end as he put on a tough third period ride out to win with an escape and riding time. Volk was active on bottom, and Mastro was able to follow through and stay on top to get the gritty win.

Voinovich is tough on top

Coming out of highschool Voinovich was known to be a tough leg rider, and he showed it here. Against a very experienced Wyoming wrestler, Voinovich was able to get boots in and throw a brutal power half to get nearfall points. He can sometimes put himself in some danger with putting legs in, but once he gets there it’s tough to stop. I’ll be very curious to see how his top wrestling looks against more ranked opponents.

With OSU now at 3-0, they carry a good amount of momentum into this break. They don’t compete again until December 4th against Minnesota. The team is undefeated, but they definitely still have some things to work on. There are likely to be more lineup battles, especially because I wouldn’t be surprised if this was Sheets’ last time up at 165lbs. That means that Gfeller could challenge for the 149lb spot, and 165lbs will again be somewhat up in the air. This OSU lineup has impressed and surprised so far this season, however and will look to keep ascending as they take on tough teams.