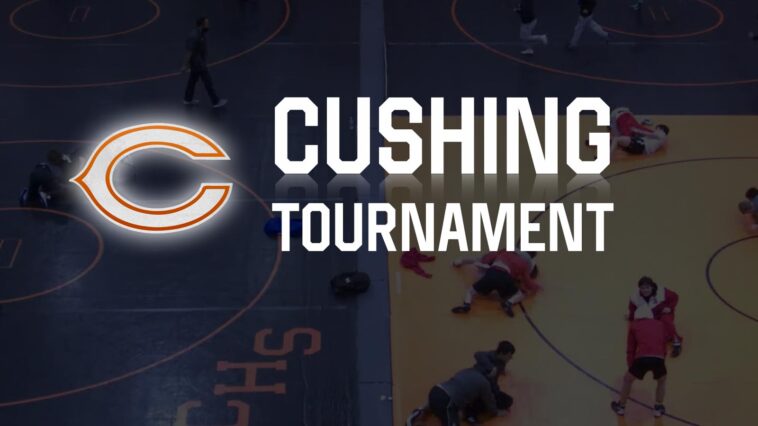 Led by individual champions Josh Taylor, Cougar Anderson and eight other placers, the Skiatook Bulldogs powered their way to the team championship at the 30 team Cushing Tournament.

The tournament, loaded with many talented wrestlers, featured 13 top-ranked individuals and 16 teams ranked in the Top 10 in their respective classes.

Skiatook, which will compete in the Class 5A Dual Tournament, but in the Class 4A traditional tournament scored 218.5 points to finish 27.5 points ahead of 2nd place Cushing.  Heritage Hall, ranked 6th in Class 4A, but looking to move up in the rankings, placed 3rd with 163 points.

At 106, Class 4A’s top-ranked Aden Sanders of Blanchard earned the title with a tight 3-2 tie breaker victory over talented freshman Tre Tescon of Cascia Hall.  At 113, Heritage Hall’s Davis Park breezed to the title with three falls and a 13-2 major decision win in the finals over Chase Cormican of Sperry.  Park rolled to the finals with falls over Class 3A 3rd ranked Kaizyn Kraft of Bridge Creek and 3A’s top-ranked (and state runner-up) Owen Martin of Berryhill.  Catoosa state champion Guy Clevenger was in the semifinals, but was unable to finish the tournament and defaulted his remaining matches.

Stilwell state runner-up Jace Caviness turned in an impressive performance to win the 120 lb. title.  Caviness, a sophomore, pinned all four of his opponents, including a fall in the finals over Bridge Creek’s state champion Kaden Smith.  Cushing’s top-ranked Hayden Lemmons wrestled a great tournament as he marched to the finals with three straight major decision victories (including an 11-2 semifinal win over state placer Braven Bowman of Wagoner).  Lemmons then wrapped up his title with an impressive 11-4 win in the finals over state champion Brody Gee of Skiatook.

In a battle of state champions, Cushing’s Luke Ahrberg squeaked out a 3-1 victory over Eli Benham of Sperry to claim the 132 lb. title.  Ahrberg advanced to the finals included a fall and major decision win while Benham earned a thrilling 11-9 overtime victory over Grove’s two-time state runner-up Jaydale Whitlock to advance to the finals.  At 138, three-time state champion Josh Taylor of Skiatook won the title with a 7-2 finals win over Perry’s state runner-up Logan Smith.  Taylor advanced to the finals with two falls and a tech fall win while Smith earned a tough 4-3 win over two-time state placer Cutter Sheets of Stilwell to advance to the finals.

At 145, sophomore Luke Eschenheimer of Cascia Hall advanced to the finals with three straight falls.  The finals featured two undefeated wrestlers, but Eschenheimer took the 3-1 win over Fort Gibson’s Grant Edwards to win the title.  The finals at 152 saw two of the top wrestlers in the state battle for the title.  Heritage Hall sophomore KJ Evans is a returning state runner-up and ranked number 1 this year.  Braden Drake (star running back on Wagoner’ state championship football team) placed 4th at State in 2018, was a 2019 state champion and finished 2nd last year.  Evans won this classic match-up by a 7-3 score to win the 152 lb. title.

Bridge Creek’s three-time state finalist and two-time champion Kolby Depron won the title at 160 lbs.  Depron advanced to the finals with three straight falls before winning the title with a 9-2 win over Heritage Hall’s EJ Beloncik.  In another battle between top-ranked wrestlers, Skiatook three-time state champion Cougar Anderson rolled to a 10-2 major decision win over Heritage Hall’s Gannon Allen to take the 170 lb. title.  Allen, a state runner-up last year, advanced to the finals with a major decision win and two falls, while Anderson (77-0 over the past three years) moved to the finals with three straight falls.

Cushing’s top-ranked William Simpson won the title at 182 with a fall in 5:49 over Johnathon Roberts from OCS.  Simpson’s march to the finals included a fall and 12-3 semifinal win, while Roberts big 12-6 win over two-time state placer Kaden Charboneau of Wagoner helped propel him to the finals.  Shawnee junior Kyle Helie (ranked 3rd in Class 5A) won the 195 lb. title with a 6-4 win over Sperry’s 2nd ranked Seth Jackson.

Guthrie’s Hayden Simpson came into the tournament unseeded, but earned four straight falls to win the 220 lb. title.  Simpson’s falls included an 18 second fall in the semifinals and then winning the title with a fall in 3:12 over Wagoner’s 2nd ranked Logan Cole.  Elgin junior Rylan Hitt wrapped up the tournament with an impressive performance at 285.  Hitt (3rd at State last year) advanced to the finals with three falls, including a fall in eight seconds and a semifinal fall over state runner-up Beau Stokes of Cushing.  He saved the best for last as he took a well-earned 5-0 win over 2X state champion Ryder Wiese of Blanchard to claim the title.