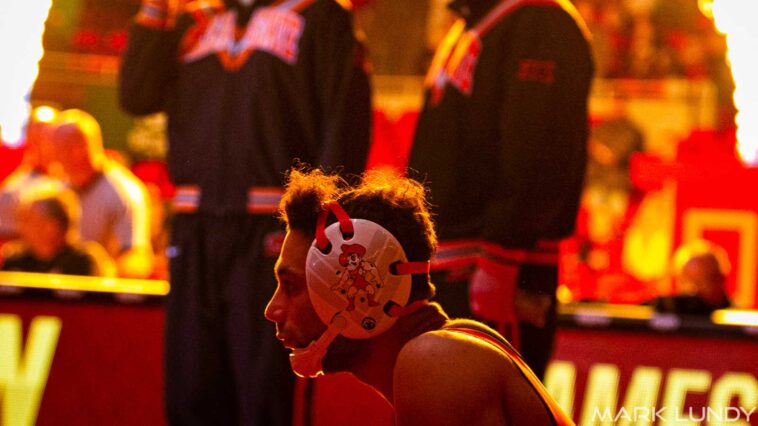 STILLWATER – Cowboy wrestling begins its 2021 season with back-to-back duals against Chattanooga and Oregon State on Sunday, Jan. 10. The duals are part of a four-team meet that also includes Little Rock.

The fourth-ranked Oklahoma State wrestling team (0-0 overall; 0-0 Big 12) opens its 2021 season with a doubleheader against Chattanooga and Oregon State on Jan. 10. The Cowboys wrestle the Mocs first at 12 p.m. CST before taking on the Beavers at 2 p.m. CST.

Oklahoma State and Chattanooga have met seven times in the programs’ histories, with each match ending in favor of the Cowboys. Most recently, the Pokes defeated the Mocs in New York’s Madison Square Garden in 2012, 41-9. In that dual, OSU assistant coaches Chris Perry and Tyler Caldwell both picked up falls of their opponents. The first meeting between the schools took place in 1950. OSU defeat­ed Chattanooga 34-0.

Oklahoma State and the Beavers of Oregon State have met 20 times over the years. The first contest took place in 1961 in Corvallis, where the Cowboys topped Oregon State 20-5. OSU has won all of its dual meets against the Beavers. The programs have not wrestled since 2005 when current Oregon State head coach Chris Pendleton picked up a fall as a member of the Cowboys. Oklahoma State assistant coach Zack Esposito also wrestled in the dual, earning a 12-2 major decision en route to a 40-4 win for the top-ranked Cowboys.

John Smith’s coaching tree is undoubtedly the largest in the collegiate wrestling world.

Seven of Smith’s former wrestlers at Oklahoma State are now head coaches running their own programs across the nation, not to mention the numerous assistant coaches, along with Glen Lanham, who was a teammate of Smith at OSU, and Mark Cody, a graduate assistant at OSU, who are now both head coaches.

Three of those former wrestlers will return to their roots in Gallagher-Iba Arena when the Cowboys host Sunday’s quad meet with Little Rock, Oregon State and Chattanooga.

Little Rock’s coaching staff consists of two former Cowboys in head coach Neil Erisman and assistant Chandler Rogers. Erisman spent his career at Oklahoma State wrestling at 157 pounds, compiling a 92-36 record and a Big 12 Championship throughout his time in Stillwater. Rogers was a three-time All-American and four-year starter for the Cowboys putting together a 110-30 record. A 2019 graduate of OSU, Rogers is familiar with the current Cowboy roster having wrestled alongside the likes of Daton Fix, Kaid Brock and Boo Lewallen just a couple years ago.

At Oregon State, former Cowboy Chris Pendleton is set to face his old head coach for the first time when the teams square off at 2 p.m. on Sunday. A two-time national champion at Oklahoma State, Pendleton and current Cowboy assistant coach, Zack Esposito, were members of the 2003-05 teams that won NCAA team championships.

Pendleton will try to give Smith just his second dual loss against a former wrestler of his, as Smith has garnered a 19-1 head-to-head record in those matchups. His only loss came from Pat Popolizio when NC State defeated the Cowboys 19-15 in 2015.

A Pair of Oklahoma State Wins Would…

•  Improve John Smith’s record against Chattanooga to 7-0; against Oregon State to 13-0

Cowboys in the Polls

Entering the Cowboy’s first duals of the season, Oklahoma State’s lineup features eight wrestlers ranked in various preseason polls. Sophomore 133-pounder Daton Fix comes in across Win Magazine and FloWrestling’s ranks at No. 2 and No. 1 in TOM and the Intermat polls as the highest ranked Cowboy. Not far behind Fix are teammates and returning Big 12 individual champions Boo Lewallen and Travis Wittlake. Lewallen (149) ranks No. 4 among all of the polls, while Wittlake (165) is No. 4 in all but one, a No. 6 ranking from FloWrestling.

Also appearing across all four rankings is senior Kaid Brock who is looking to get back to his All-America form at 141 pounds after an injury kept him from wrestling last season for the Cowboys. Brock is ranked in the top-10 in each of the rankings and as high as No. 6 by The Open Mat. Wyatt Sheets returns to the Cowboy lineup at 157 pounds and appears in the top-10 in three of the four polls after a runner-up finish at the Big 12 tourna­ment in March. Senior Dakota Geer is ranked as high as No. 8 and as low as No. 10 at 184 pounds where he was an All-American in 2019 after wrestling at 197 pounds last season.

After qualifying for the NCAA Championships at 133 pounds as a true freshman, Reece Witcraft is ranked No. 16 by Intermat and No. 17 by FloWrestling at 125 pounds. Sophomore Anthony Montalvo appears in the top-10 of Win Magazine and Intermat’s polls at 174 pounds where he is expected to compete for the starting spot with freshman Dustin Plott once he returns from injury.

Fans can follow the Cowboys’ bouts Sunday against Chattanooga and Oregon State with @CowboyWrestling on Twitter. Rex Holt will be on the call for both duals beginning just before 12 p.m. CT on Hot 93.7 KSPI-FM. The Oregon State contest will stream on Big 12 Now on ESPN+ with Lee Roy Smith and J. Carl Guymon on the call at 2 p.m. Trackwrestling.com will have live stats for both matches.