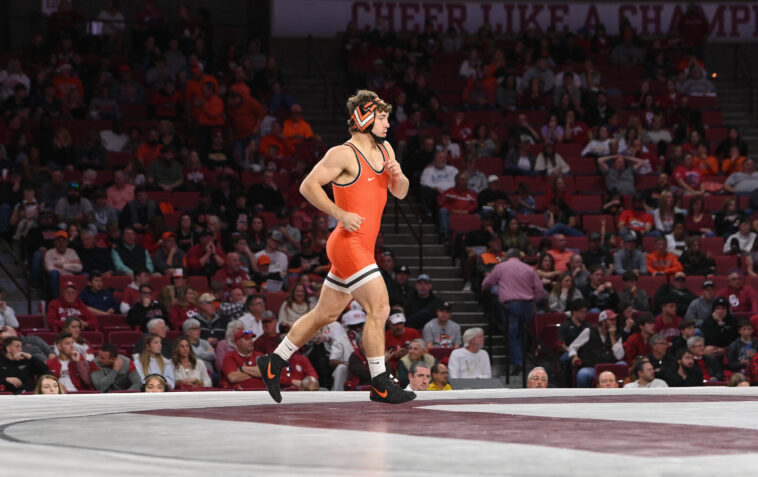 STILLWATER – Head coach John Smith and the Oklahoma State wrestling program released its schedule for the 2022-23 season that consists of 17 duals and includes another neutral-site event against a marquee Big 10 opponent.

Eleven of OSU’s 17 dual opponents are currently ranked in Intermat’s preseason dual meet rankings. Four of those ranked matchups will be held inside Gallagher-Iba Arena as part of a seven-match home slate this season.

OSU will open its season with a doubleheader in Pennsylvania on Nov. 12, first facing No. 21 Lehigh before traveling west for a nightcap with Bucknell. It will be the first time the Pokes have wrestled at Bucknell since 2012 and at Lehigh since the 2019-20 season.

The Cowboys will not leave the state of Oklahoma for another dual in the 2022 calendar year following their first road trip. They return home to face Wyoming on Nov. 18 in what will be the first of seven home duals inside historic Gallagher-Iba Arena. OSU will have two weeks off before its next dual on Dec. 4 when it hosts No. 11 Minnesota, before traveling to Norman on Dec. 11 for the first Phillips 66 Bedlam matchup of the season with No. 20 Oklahoma.

After a trip to the Southern Scuffle to ring in the new year, Oklahoma State will resume dual action on Jan. 8 with a trip to the Pacific Northwest to square off with Chris Pendleton and Oregon State. Coming off its highest finish (12th) at the NCAA Championships in a decade, Oregon State will host the Cowboys in Corvallis for the first time since 2003. The next weekend, the Pokes will travel to the opposite side of the country for a match with Columbia on Jan. 15 to return the home dual the Lions traveled to Stillwater for on short notice last season.

Following a pair of home duals with Northern Colorado and West Virginia on Jan. 20 and Jan. 22, the Cowboys endure arguably their toughest stretch of the season. To close out January, Oklahoma State will travel to face No. 14 Northern Iowa and No. 13 Iowa State on back-to-back days, Jan. 28 and Jan. 29. Then, the Pokes will wrestle No. 7 Michigan on Feb. 3 in a neutral-site event with the location to be announced at a later date. The Cowboys will close out the stretch of top-15 matchups when they play host to No. 3 Missouri on Feb. 5 in what will be the highest-ranked dual of the home slate.

On Feb. 10, OSU will take its last conference road trip of the season to square off with No. 22 South Dakota State. A two-match home stand with Stanford on Feb. 12 and Oklahoma on Feb. 16 will conclude the home schedule for the Cowboys. The Pokes will head to Carver-Hawkeye Arena on Feb. 19 to round out the regular season with a dual against No. 2 Iowa.

Each of the seven home duals for Oklahoma State will be streamed on Big 12 Now on ESPN+. Fans can purchase season tickets, which start at only $50, by clicking here.