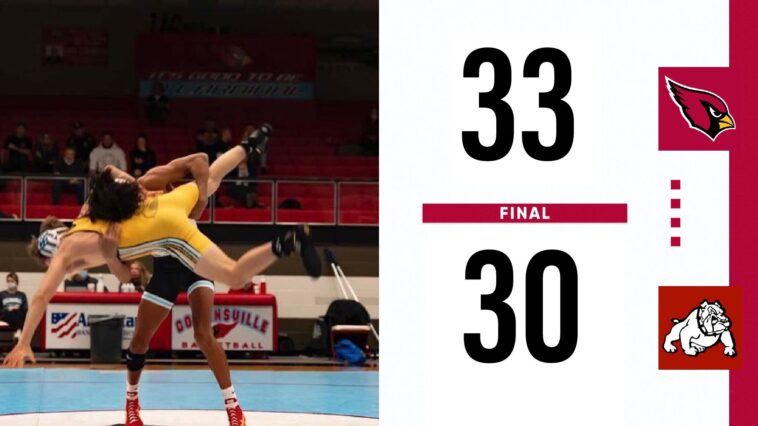 The longstanding rivalry between the Cardinals and Bulldogs provided the Oklahoma wrestling community with another nail-biting showdown and a sneak-peak into what we could see at the 2021 5A Dual State Tournament. Collinsville is currently ranked #1 in the 5A Dual-Team Rankings, closely followed by Skiatook at #2.

Last season proved just how competitive the two teams are when Skiatook took the Dual State Championship 32-28, followed by Collinsville claiming the team trophy at the individual state tournament. The Cardinals were able to overcome the Bulldogs in this season’s meeting 33-30.

The two teams are stacked with multiple time state champs, nationally credentialed athletes, and Division 1 commits. With Skiatook’s move into the 4A class for individual tournaments, dual state could be the last time we see some of these anticipated match-ups take to the mat. Let’s take a look into what happened this time around.

Freshman, Cannon Acklin, is currently ranked #1 at 106lbs for the Collinsville Cardinals. He spared no time in securing 6 points for his team with a first period fall over Skiatook’s Cole Smith. Skiatook was able to even the scoreboard out at 113lbs when Kyle Bowman received a forfeit from the Cardinals.

At 120lbs, sophomore and #1 ranked wrestler for Collinsville, Clay Gates, received a 7-1 decision over Skiatook’s Josey Jernegan. Gates is a returning state placer at 106lbs where he received 3rd place. Skiatook’s Brody Gee won the same bracket, but the two never met at the tournament. Jernegan was also a 2020 placer with a 4th place finish at 113lbs.

Gate’s win sparked a three match run for the Cardinals when #2 ranked Cole Brooks gained a 6-4 decision over Skiatook’s Brody Gee at 126lbs and x2 state champ Cameron Steed, earned a first period fall over the Bulldogs’ Sam Harris at 132lbs. Steed is a junior this year and with two state championships under his belt already, could potentially be in route to becoming a four-timer.

x3 state champion and the 2020 Pre-Season national Champion, Josh Taylor, was able to break the Cardinals’ winning streak with a 4-1 decision over Collinsville’s Garret Strickland at 138lbs. Taylor is nearing the end of his senior season where he will wrestle in his final state tournament. If victorious, he will become one of the rare x4 Oklahoma state champions.

Collinsville grabbed another quick six points at 145lbs from Drake Acklin with a fall over Skiatook’s Riley Orourke. The Cardinals kept up the momentum with a 5-1 decision at 152lbs from Blake Gilkey over the Bulldogs’ Isaac Long.

Next, Jordan Williams took the mat at 160lbs for the Cardinals, wrestling up from his usual weight classes of 138 or 145lbs. Williams was fresh off the mat from his exhibition match on the Burroughs-Dake Flowrestling card, but nevertheless was prepared to help his team take the win against Skiatook. He picked up a quick fall against Skiatook’s Ivan Long, but we are nowhere near the end of watching this high school junior compete due to his recent commitment to further his academic and athletic career as a Cowboy at Oklahoma State University.

Skiatook’s Tony Johnson was able to pick up a crucial six-points for the Bulldog’s with a big pin at 170lbs over Collinsville’s Colby Morrison. Much like the 2020 Dual State finals match, Collinsville created a vast point spread early on, but Skiatook crept back to lessen the gap with the upper-weights.

At 182lbs, another potential four-timer for the Bulldogs, Cougar Andersen, picked up a 4-1 decision over Brayden Gilkley of Collinsville. Andersen is a x3 state champion, coming off of two undefeated highschool seasons. He will also be continuing his career at the Division 1 level next season at the University of Arkansas-Little Rock under Oklahoma State wrestling alumni Neil Erisman.

Skiatook claimed the last three matches of the night with a 14-7 decision from Alex Johnson over Gabe Lyons at 195lbs, a 3-0 decision from Hunter Hall over Zach Morris at 220lbs, and a pin from Nathan Easky over KJ Jones at heavyweight.

Even with six consecutive wins from the Bulldogs to conclude the dual, they still lacked 4 points to overcome the Cardinals’ early lead. With countless ups and downs, unexpected comebacks, and combined eleven individual state titles, this rivalry never disappoints.