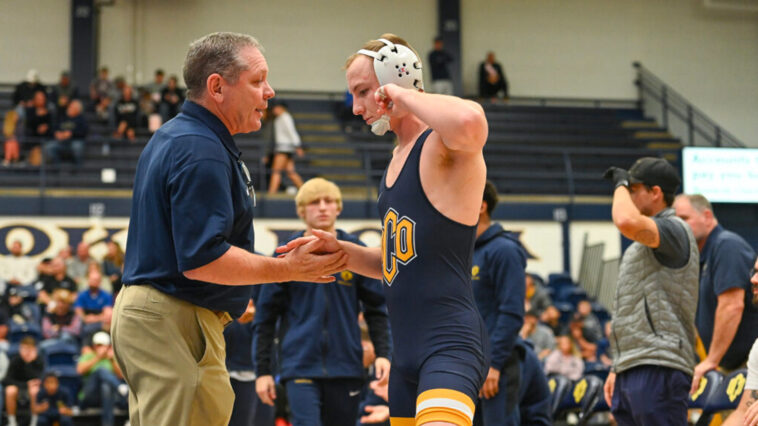 INDIANAPOLIS, Ind. (Dec. 18) — Central Oklahoma’s hopes of taking the team title in the prestigious Midwest Classic were dealt what appeared to be a crippling blow before action even got underway Saturday morning in the toughest NCAA Division II wrestling tournament of the regular season.

Flu-like symptoms suffered overnight Friday shelved 133-pounder Tanner Cole and 157-pounder Ty Lucas, a pair of huge losses for the top-ranked Bronchos. The second-rated Cole would have been the No. 1 seed, while the fifth-ranked Lucas was set to be the No. 2 seed.

It was up to the remaining eight individuals to pick up the slack – and that’s exactly what happened.

UCO pushed five into the semifinals, has two others still alive in the consolations and surged into the lead after first-day action at Nicoson Hall on the University of Indianapolis campus. The Bronchos have 71.5 points, good for a 14.5-point lead over No. 9 Wisconsin-Parkside.

Making the semis for Central were 125 Paxton Rosen, 141 Nate Keim, 149 Brik Filippo, 184 Alex Kauffman and 197 Dalton Abney, while 174 Kalin Winkler and Hvy Braden Morgan are in the consolations. Only 165 Anthony DesVigne was eliminated after a long day that saw the Bronchos go 22-4 with 15 bonus-point wins.

“Our guys wrestled really hard today and put us in a good position,” head coach Todd Steidley said. “Obviously there’s still a long ways to go and we have a lot of big matches coming up, but I was really proud of the way we performed today.