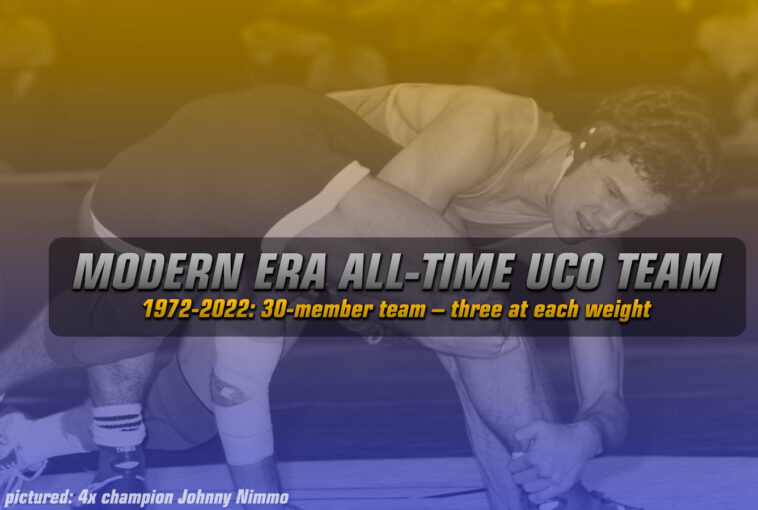 Trying to choose an all-time team for any sports team is always difficult, but it’s even harder when you’re dealing with a Central Oklahoma wrestling program that has enjoyed such amazing success over the past 50 years.

UCO reinstated its wrestling program in 1972 after a 25-year hiatus and the Bronchos have captured 15 national championships in the 50 years since – eight in NAIA and seven in NCAA Division II. There have been another 19 top-four finishes, including seven runner-up showings.

Filtering through the dozens of national champions and hundreds of All-Americans who took the mat for the Bronchos to come up with a 30-member team – three at each weight — was a monumental task indeed.

Does this three-time finalist go over that two-champ champion here? How do you pick between a pair of three-time winners there? And what about the weight that had a trio of two-time champions, all with the credentials to be the first-teamer?

There were some easy choices and there were many more hard ones, but there is no contesting the strength of this squad. Nearly 1,100 career wins, 21 national titles and 37 All-America finishes attest to the quality of the first team alone.

So, in celebration of the program’s 50-year anniversary of reinstatement, here is the Modern Era All-Time UCO Team.

Randy Zellner earned the first-team nod by a narrow margin after an 8-1-2-2 career from 1990-94 that saw him finish with 132 career wins. A three-time regional champion who helped the Bronchos to three straight Division II team titles, Zellner won a national title as a sophomore before losing narrow finals decisions the next years.

Mark Dodgen was a close second after 1-3-1 national finishes from 1999-03. He won three regional titles, had a 78-16 career record with 33 falls and was part of two national championship teams.

The top three have a combined nine national titles, but there was a clear-cut winner in…