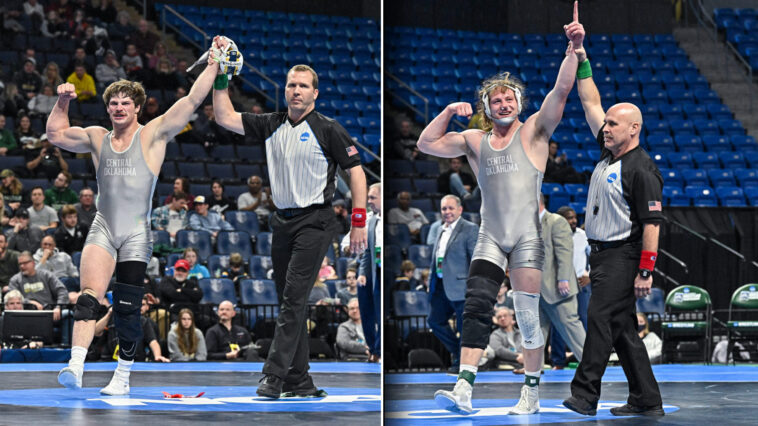 A loss that lingered and a defeat that actually proved beneficial paved the way for Central Oklahoma’s latest two national champions.

For Dalton Abney it was a stinging 1-0 setback in last year’s 197-pound national finals that provided the motivation to propel himself to the top of the podium in 2022.

For Heath Gray it was a narrow loss that ended a long and sometimes burdensome winning streak that pushed him to a second straight title, capping off one of the best careers in UCO’s illustrious history.

Abney and Gray reached the pinnacle of NCAA Division II wrestling Saturday night at Chaifetz Arena in St. Louis, Mo. in leading the No. 2-ranked Bronchos to a runner-up finish in the team race, Central’s best national tournament showing since 2007.

Abney made up for a 1-0 loss to McKendree’s Ryan Vasbinder in last year’s title bout with a 6-0 finals shutout of Indianapolis’ Derek Blubaugh to polish off a dominating national tournament performance. The sophomore standout allowed one point in four matches, that coming on a penalty.

“I got second last year and that hurt,” Abney said after his championship win. “I bawled for 15 minutes after that match, by myself in the corner. After I got off the podium, I put that trophy in the box and I haven’t touched it since.

“The night I got home I put it (trophy) on my mantle. I looked at it every day and it just gave me a reminder of what it felt like and I didn’t want to ever feel like that again. So I busted my ass and now I’m here.”

The Tulsa Cascia Hall product overwhelmed every opponent this season, finishing 26-0 with 10 falls and four major decisions. Abney allowed a mere 13 points in those 26 bouts – one takedown, one penalty and 10 escapes – in becoming a three-time All-American.

“I approach every match the same, whether they’re a stud or not,” Abney said. “I have to go get it and I have to prove why I’m number one, why I’m undefeated and why I deserve to be national champion.”

And a national champion he is.

Gray became a two-time champion at 184 pounds with his 4-3 finals triumph over West Liberty’s Connor Craig, cementing his place among UCO’s all-time greats. And it was a rare loss that helped the senior star get there.

The Chandler native was on track to etch his name in the school record books for the longest winning streak when he was beaten by Nebraska-Kearney’s Billy Higgins 3-2 in a Feb. 6 dual.

It was Gray’s first defeat in three years and ended a 50-match streak, five short of tying the record held by Cory Dauphin. But in retrospect, the loss actually benefitted his quest for a second title.

“I know I had it my mind that I wanted to be on the leaderboard at UCO for the longest winning streak,” Gray said after Saturday’s finals. “Not to say it was too much of a distraction, but I did spend time thinking about that and it was really just a big weight off my shoulders whenever I lost.

“It sucked, but it was a weight off my shoulders and one less thing to worry about. It kind of loosened things up for me. It was time to just cut loose and go wrestle.”

Gray rebounded from that rare setback to win his last seven matches. He swept three straight in capturing his fourth regional title – just the third UCO wrestler to accomplish that feat – before going 4-0 in St. Louis to claim his second national title and become the school’s 11th four-time All-American.

And Gray avenged the loss to Higgins in the national tourney, cruising to an 8-2 semifinal win before getting past Craig in the title bout for the second straight year.

Gray finished an astounding 94-4 for his UCO career — a record for winning percentage (95.9) — while ending up second in major decisions (34) and longest winning streak (50).

“It’s a great way to end my career and I’m so thankfully for this university, this program and my teammates,” Gray said. “I came back to help us win a national championship and we fell a little short of that, but it was a special year.”