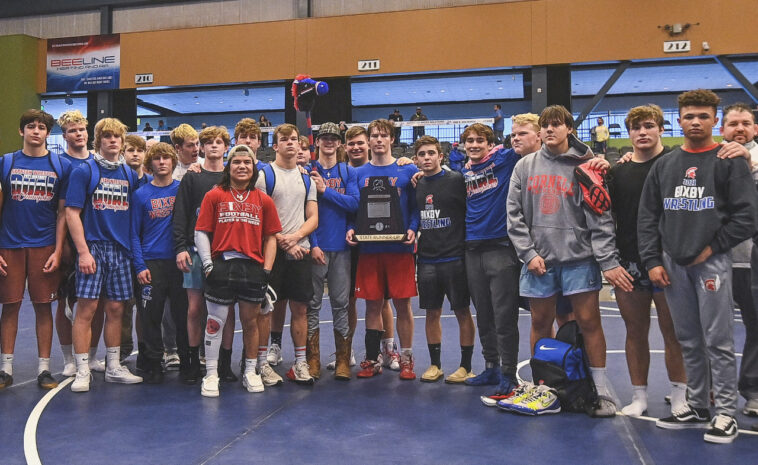 Bixby wrestling had the blockbuster hire of the offseason in Oklahoma High School wrestling when they announced former Stanford associate head coach, Ray Blake as their new wrestling coach.

Expectations are sky high coming off last season’s dual state runner up and 5th place team state finish. Their boys’ team returns eleven state qualifiers, five state medalists, and three state champions while adding a healthy mix of new and young talent to the lineup. Blake says they look forward to competing with the many great programs across the state, but their focus will be inward—on continuous improvement, executing with integrity, and maximizing their potential. Blake believes if they succeed in those areas, they will be able to compete for Bixby Wrestling’s first team state title since 1987.

As excited as they are for the boys’ team, they are equally as excited about growing their girls’ program. The Thompson sisters are providing excellent leadership for the younger girls and they expect to continue to increase their roster size, coaching resources, and competitive opportunities for them. While the roster is still expanding, the girls already on it are solid and give a great nucleus around which to build.

* Partial lineup—Will be without FB players

** Will be sending second teams

Shane Roller (HS Asst Coach): 10th season coaching at Bixby HS after an illustrious high school, collegiate, and UFC career. 3x NCAA D1 All-American at Oklahoma State where he led the Cowboys to an NCAA team championship as a senior. 4x Oklahoma state champion at Bixby HS. Head coach of Roller Academy of Wrestling (RAW) and co-owner of the World of Wrestling which runs the Tulsa Nationals, Kickoff Classic, and Reno Worlds. Shane is the linchpin of the Bixby wrestling program.

Kenny Giddens (HS Asst Coach): 4th season at Bixby with over 12 years’ experience coaching at the HS and youth levels. Has previously served as head junior high coach, also coaches at Roller Academy of Wrestling. Oklahoma state medalist at Mannford HS. Kenny is a workhorse who bleeds Bixby Wrestling, the unsung hero of our coaching staff.

Brian Douglas (HS Asst Coach): 13th season coaching at Bixby HS, wrestled for Steve Dunlap at Broken Arrow HS (’95). Also the Inside Linebackers Coach for 6-time defending state champion Bixby Spartan Football. Brian is a professional who brings invaluable experience and expertise with the ins and outs of the high school and history of the Bixby wrestling program.

Paden Bailey (JH and HS Asst Coach): First season at Bixby but isn’t lacking in familiarity as father Leo is an all-time Spartan wrestling great. Will primarily focus on the JH room but will assist at the HS level as well. An Oklahoma state champion and 2x state medalist at Broken Arrow, Paden wrestled for one season at UCO and is now a firefighter in Bixby.

Conner Myers (Strength Coach): First year at Bixby after four years as the Strength and Conditioning Coach at Edmond Memorial HS. Oversees S&C for all Bixby athletics programs and has already proven to be a critical component of our coaching staff. Develops wrestling-specifics lifts for our HS and JH student-athletes both in and out of season. In less than two months, Coach Myers has our team looking as strong as ever.

Stephen Moss (Athletic Trainer): 10th season at Bixby after three years at Missouri Southern State and an undergrad career at Oklahoma State. Coach Moss is the gatekeeper of our student-athletes health and works tirelessly to keep them performing at their highest levels. One of seven national finalists for the Varsity School Spirit Award for Athletic Trainer of the Year. Also responsible for the football, track & field, tennis, soccer, cheer/dance, and swimming teams.