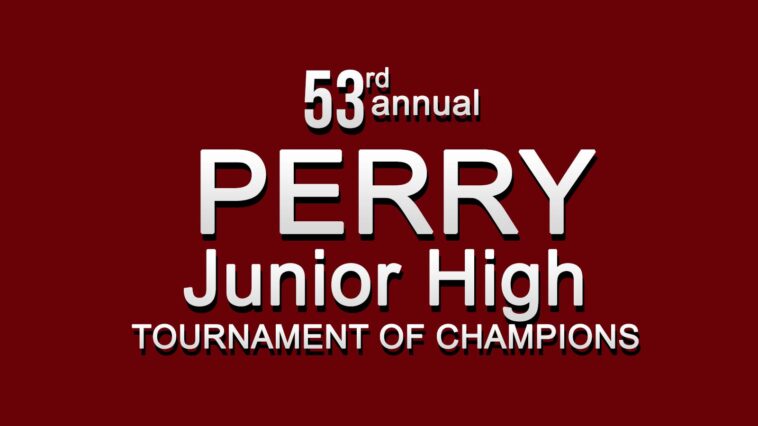 Broken Arrow went a perfect five for five in the championship finals to roll to the team championship in the 53rd Annual Perry Junior High Tournament of Champions. The Tigers added four 3rd place medalist plus two other placers to finish an impressive 100 points ahead of 2nd place Yukon. In a three-way battle for the 2nd place trophy, the Millers edged Deer Creek by 1.5 points with Sand Springs finishing 4th, just 1.5 points behind Deer Creek.

The tournament kept one long standing tradition by competing as an unseeded random draw tournament. Due to the pandemic, no fans were allowed and the tournament was limited to 14 teams to help with social distancing. The tournament used a pool format to give the wrestlers more matches with the top two in each pool advancing to the Gold Bracket and the remaining wrestlers competing in the Silver Bracket. The random draw saw four weight in which two wrestlers competed in the pool wrestling and then faced each other again in the championship finals.

Domination was the word of the tournament, as ten of the finals were decided by fall. Broken Arrow 8th grader Hudson Beckley improved to a perfect 17-0 on the season as he picked up four falls before earning an 8-3 finals win over teammate Evan Knotley. 7th grader Hunter Knox turned in an impressive performance to win the title at 86 lbs. Knox never went into the 2nd period, picking up four 1st period falls, including a fall in 1:35 in the finals to give Broken Arrow their 2nd champion.

Cushing 8th grader Izaih Tusler won his 2nd Perry Tournament title with an equally impressive performance. Tusler, had four falls out of his five wins, including a fall in 1:21 in the finals over Jace Province of Deer Creek. Blackwell’s Louden Wolfe defeated Wesley Madden of Edmond Memorial in a pool match and the two met again in the finals with Wolfe winning again to improve his season record to 19-3, in claiming the title at 98 lbs.

106 lbs. also saw another rematch as 7th grader Juan JR Ybarra of Altus defeated Matthew Moore from Sand Springs in the pool match and again in the finals to claim the title. The title adds to an impressive season for Ybarra as he also claimed a championship at the recent JOC Tournament. Yukon freshman Dylan Ryan went from not placing at last year’s Perry Tournament to winning the 112 lb. title this year. Ryan went 5-0 in the tournament, including falls in :15 and :37, before picking up a fall in 1:41 in the finals.

Broken Arrow freshman Kadence Rupp credits great summer workouts with his improved wrestling this season as he wrestled an outstanding tournament to win the 119 lb. title. Ruup, like teammate Hunter Knox, never went into the 2nd period, in winning all six of his matches by 1st period falls. Gatlin Gunn of Sand Springs picked up five falls and a 15-0 tech fall win, to earn the 126 lb. title. In a tournament with many worthy candidates, Gunn’s impressive showing earned him the tournament’s Outstanding Wrestler Award.

Bristow’s Haydan Yocham had a scare in the pool matches, when he picked up a sudden-victory win over Vinita’s Coleman Kauffman, but rolled through the rest of his matches, including a fall in the finals over Deer Creek’s talented Brady Brewer to win the 132 lb. title. Broken Arrow’s Mason Dempsey was another wrestler worthy of OW consideration as he rolled through the tournament with six falls (five in the 1st period), including a fall in the finals in :32 over Edmond Memorial’s Rhett Winchester (7th grade State Champion last year).

Blackwell’s Jason Osgood defeated Adrian Flores of Sand Springs in the pool and then once again in the finals to claim the title at 155 lbs. Osgood had three falls out of his six wins to improve his season record to 24-4. The host school claimed their only title when freshman Treg Bowman turned in an impressive performance to win the title at 170 pounds. Bowman went 5-0 in the tournament with four falls, including a fall in 4:10 in the finals over Edmond Memorial’s Jack Smith.

Blackwell claimed their 3rd individual title when Kruz Goff cruised to the 195 lb. title. Goff never went into the 2nd period in picking up five 1st period falls. His fall in the finals over Yukon’s Kayson Holman was a repeat of their pool match. Broken Arrow freshman Tristan Sasse dominated the 285 lb. bracket to give Broken Arrow their 5th individual champion and was another champion that never went into the 2nd period. Sasse had falls in :19, :12, :55, 1:27, before claiming his title with a fall in :39.