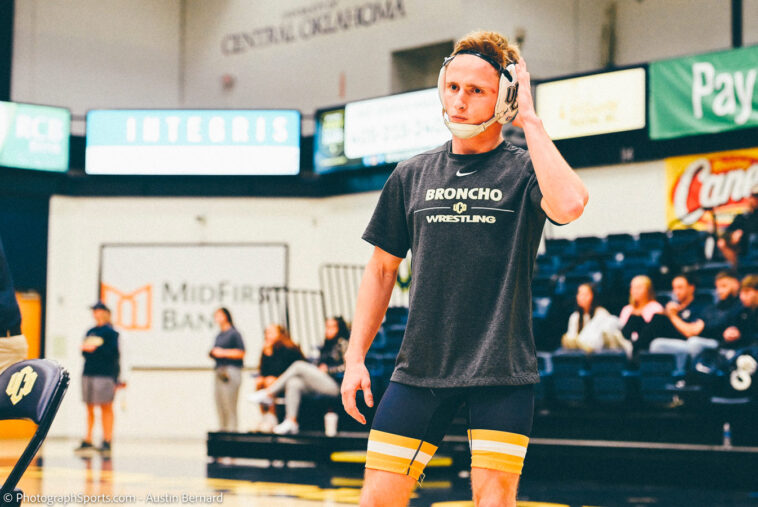 The Bronchos jumped to an early lead as 6th ranked Paxton Rosen racked up six takedowns to take an 18-3 tech fall win while 3rd ranked Tanner Cole picked up three takedowns on his way to a 13-2 major decision win.  Hitting the strength of the Greyhounds line-up, Nate Keim got the crowd going in a spirited battle with highly regarded Breyden Bailey.  In an action-packed 3rd period, Keim had an answer for every move Bailey attempted to take the well-earned and highly appreciated 4-1 win.

The fireworks continued at 149, as Brik Filippo rallied with two 3rd period takedowns to take a 5-4 win over 10th ranked Logan Bailey.  Trailing 3-1 in the 3rd period, Filippo tied it with a takedown before releasing and stalking his tiring opponent with 45 seconds remaining.  Much to the delight of the roaring crowd, Filippo scored the winning takedown with 24 seconds left to send the crowd into a frenzy with his exhausted opponent lying motionless on the mat as the final seconds counted down.

At 157 pounds, 5th ranked Ty Lucas kept the momentum going as he used three powerful takedowns to earn a 7-2 win and put the Bronchos up 18-0.  At 165, Anthony DesVigne picked up a huge win over 12th ranked Jack Eiteljorge as the energetic crowd once again played a part in the comeback win by DesVigne.  Trailing 3-1 entering the 3rd period, DesVigne, like all of the Bronchos, used superior conditioning to wear down his opponent.  DesVigne escaped early in the 3rd period before striking for the go-ahead takedown with just under a minute left.  Again, urged on by the deafening roar of the crowd, DesVigne rode out Eiteljorge to take the exciting 4-3 win.

Kalin Winker trailed 4-0 and was denied a comeback win as he fell 4-3 to 5th ranked Andrew Sams and Braden Morgan fell 1-0 to Cale Gray at 285 pounds.

The Bronchos opened the season on November 10 when they hosted Oklahoma City.  The Bronchos used falls by Paxton Rosen, Kalin Winker, Dalton Abney and Braden Morgan and bonus point wins from Nate Keim, Tanner Cole, Ty Lucas, Anthony DesVigne and Heath Gray to post the 48 -(-1) win over the Stars.  In exhibition matches prior to the UCO-OCU dual, the Broncho’s second-team took on Carl Albert State College. In a great step for wresting in Oklahoma, this is Carl Albert’s first year in collegiate wrestling.  Picking up falls for UCO were Peter Rolle, Garrett Messimore, Hunter Jump, Alex Kauffman and Christian Arriola with Thaddeus Long winning by tech fall.  Jaden TwoLance won by tech fall for Carl Albert.

Oklahoma City deducted one team point during the 174 pound match.