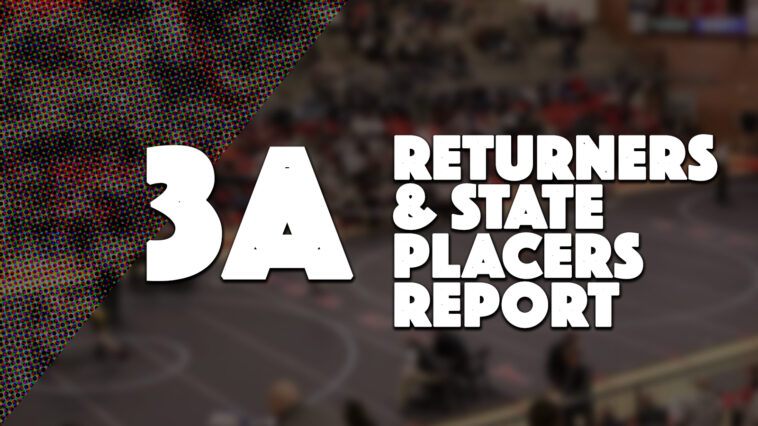 The Class 3A preseason article was written and ready to post when it was discovered that Cascia Hall is moving to Class 4A this season.  Please keep that in mind as you read the article and browse through the stats below.

Youth was the name of the game at the 2022 Class 3A State Tournament as NINE wrestlers return to defend their state titles, including an incredible group of FIVE wrestlers that won titles as freshmen last year.  There could have been ten returning state champions, but Jay suffered a big blow when 2X state champion Gage Walker moved to Bixby over the summer.

Winning titles as freshmen were Pawnee’s Stockton Allen, Colt Collett (Checotah), Kruz Goff (Blackwell) and Cascia Hall’s Miles Velasquez and Cory Velasquez.  Allen squeaked past 2X state placer Treshaun Tecson (Cascia Hall) 8-7 in the first round before earning two first period falls to win the state title and cap off a 25-2 season.  Collett and Marlow’s Brantz Bateman split wins during the regular season with Bateman having the last win, but Collett won the rubber match to win the 2022 state title and finish the season with a 25-2 record.  Miles Velasquez beat 2021 state champion Hunter Fitzpatrick (Salina) to win the 126 lb. title and finished the season with a 14-1 record. Cory Velasquez finished off a 31-3 season with a state-finals win over 2X state finalist Zach Dawson (Marlow).  Goff ended an outstanding freshman season with a dominating State Tournament that included two falls (with a fall in the finals) and a major decision semifinal win.  Goff ended the season with a 39-1 record in winning the 195 lb. state title.

Sperry junior Brady Benham will be going for his third state title as he stays on track to be a 4X state champion.  Benham was 34-5 in winning the 138 lb. title last year and has a 63-9 career record. Cascia Hall returns a third state champion as senior Luke Eschenheimer won the 182 lb. title last year.  Eschenheimer was 38-4 last year and enters his senior season with a 107-22 career record. Jay junior Maverick Williamson went 46-4, including falls in all three State Tournament matches to win the 285 lb. title.  Williamson, 81-7 on his career, was a state runner-up in 2021.  Perry senior Kaleb Owen won a thrilling ultimate tie-breaker finals match over 3X state finalist Jack Wilkins (Salina) to cap a 47-3 season and claim the 170 lb. title.  Owen, 92-36 on his career, enters the year on a 43-match win streak.