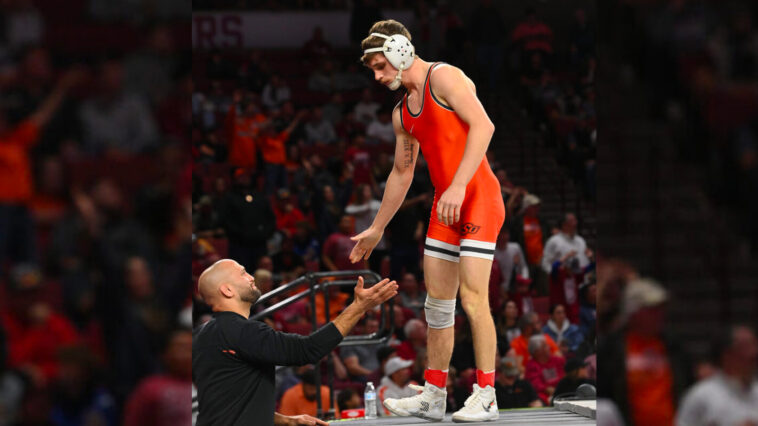 The Cowboys traveled out to Corvallis in a big dual to take on the Beavers and Coach Chris Pendleton. It wasn’t a flawless performance as Plott suffered a significant upset and at one point Oregon State won four in a row. Big performances from Mastro and Young however got the win for the Cowboys. Gfeller and Doucet had some tough matches as well. Unfortunately there doesn’t seem to be any replays on PAC 12 network, so I am going to do some general takeaways after a good win for the Cowboys.

Big Upsets for the Cowboys

Mastrogiovanni has been looking for a premier win this season after struggling early and found one here. He was 2-0 against Kaylor in 2021, but I was still hesitant to say that Mastro would get a win over the returning All-American. He scored an early takedown and showed strong defense to both get away and get the win.

Young also got an upset over Cleveland Belton. Not only was it an upset win, Young had a ton of riding time in an impressive win. For both wrestlers this is an opportunity to get back into rhythm and start climbing the rankings once again.