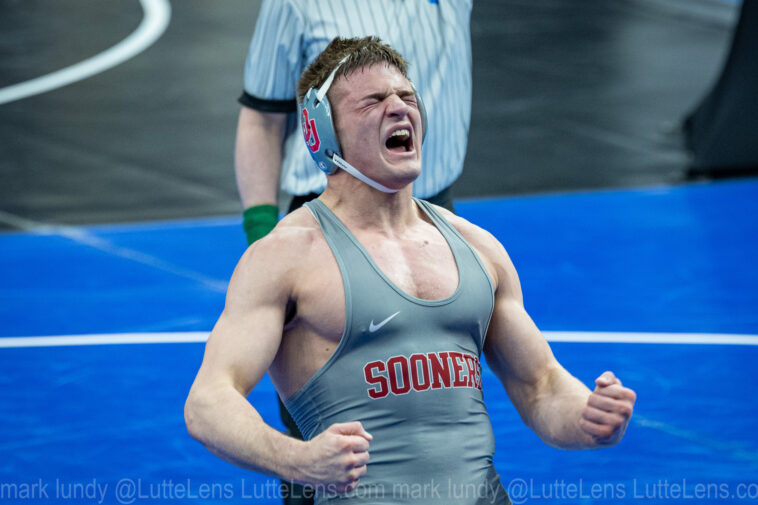 ST. LOUIS – Jake Woodley finished sixth at the 2021 NCAA wrestling national championship after dropping both of his matches on Saturday morning to top-10 seeds. With his top-eight finish, Woodley earned All-America status for the first time in his career.

Woodley became Oklahoma’s 277th All-American on Friday after opening the championship with three wins over a pair of top-10 opponents and then a top-15 wrestler. The Sooners’ 277 All-America honors are the fourth-most nationally. More impressively, Woodley was the lowest-seeded wrestler ever to make the semifinal, as the NCAA didn’t seed the entire bracket until 2019.

The redshirt junior from Pittsburgh will walk in the Parade of All-Americans on Saturday evening before the championship finals. With his performance, he became Oklahoma’s first All-American at 197 pounds since Eric Lapotsky in 2010 and just one of five all-time.

The Sooners’ season ends with an All-American for the third consecutive year after missing out on a place-winner the first two seasons of the Rosselli era. As a team, the Sooners finish with 17 points and are alone in 24th, entering tonight’s finals, where OU won’t have a wrestler. If the result holds, the 24th-place finish would mark the Rosselli era’s best, placing one spot higher than the team did in 2019.

“Everything is a process whenever you’re trying to build a program,” Rosselli said. “We had some opportunities to move up, even more, this week, but at the end of the day, we made a lot of great progress this season, and the future is bright in Norman.”

Its first Big 12 championship in 19 years highlighted Oklahoma’s season, which it won by placing three wrestlers into the Big 12 finals and crowning an individual champion in Dom Demas en route to co-champion honors with Oklahoma State.

“We’ll bring back a total of five guys next season who have made a Big 12 final,” Rosselli noted. “If we can get to work this offseason and do the things we need to do, then we will be in a good place come next fall. I’m excited to keep growing as a program and for the future.”

Oklahoma now turns its focus to the offseason, where head coach Lou Rosselli has notched three top-15 recruiting classes since arriving in 2016.