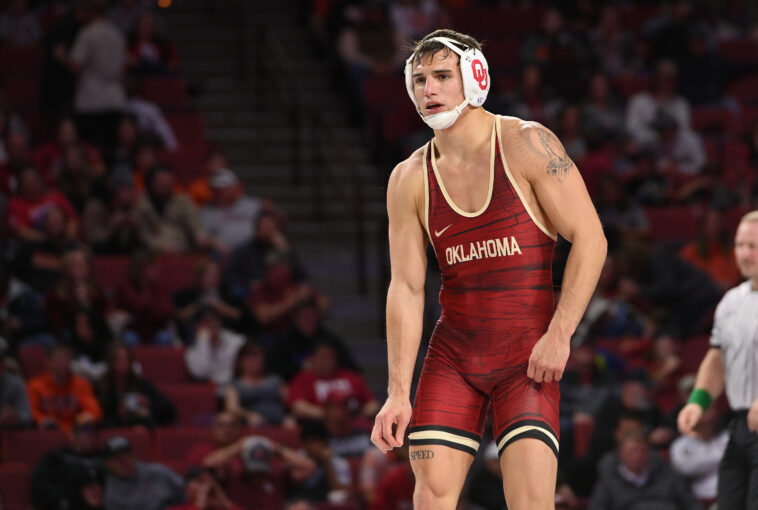 DETROIT, Mich. – Oklahoma wrestling saw its season come to an end on Friday night at the 2022 NCAA Wrestling Championships, as Joey Prata and Jake Woodley lost their matches in the blood rounds to come up one match shy of earning All-American status.

“Those two guys gave everything they could give,” head coach Lou Rosselli said after the action concluded. “They fought really hard. They were right there, so close to where they want to be. We’re talking about a game of eyelashes. I’m a little disappointed, but so are the athletes. Sometimes a little hurt is good. You learn things about yourself, what you can change and what you can be better at. Just have to regroup, start our offseason and get back to work.”

The Sooners came into the day with six wrestlers still alive, Woodley on the championship side and five more in the consolation ladder. Prata and Woodley were the only ones to make it to the fourth session.

125-pounder Joey Prata had to win three straight matches in the wrestlebacks to get to the blood rounds. Two of those victories came in the morning session on Friday. The first came in a 5-2 decision over Chattanooga’s No. 20 Fabian Gutierrez, followed up by a marathon match with No. 21 Taylor LaMont. A 2021 All-American, LaMont took Prata into the tiebreaker rounds where the OU wrestler would ride the length of the first tiebreaker period and pull off a reversal in the second to claim the match 5-3.

In his blood round bout, Prata matched up with No. 10 Michael DeAugustino of Northwestern. A tight contest went against the Sooners’ wrestler after he was unable to escape in the second, losing in a 2-0 decision.

Jake Woodley wrestled his way to the championship quarterfinals after two wins on Thursday, including a 6-3 upset victory over No. 4 Patrick Brucki of Michigan. He lost both of his matches on Friday to end his season in the blood rounds. In his final bout, he fought hard in a narrow 5-4 decision loss to Iowa State’s No. 10 Yonger Bastida.

Three Sooners came one match short of the blood rounds, as No. 16 Willie McDougald, No. 15 Anthony Mantanona and No. 27 Keegan Moore all lost their second match on Friday morning to end their tournament runs.

McDougald’s first match of the third session was the first bout to go into bonus periods for an OU wrestler this weekend. In the second tiebreaker period, the redshirt freshman from Niagara Falls claimed his second career win via fall (8:57) by pinning Minnesota’s Michael Blockhus. It is the second straight season that Blockhus has seen his season end on a pin to an OU wrestler, losing via fall to Mitch Moore in the exact same round of last year’s championship.