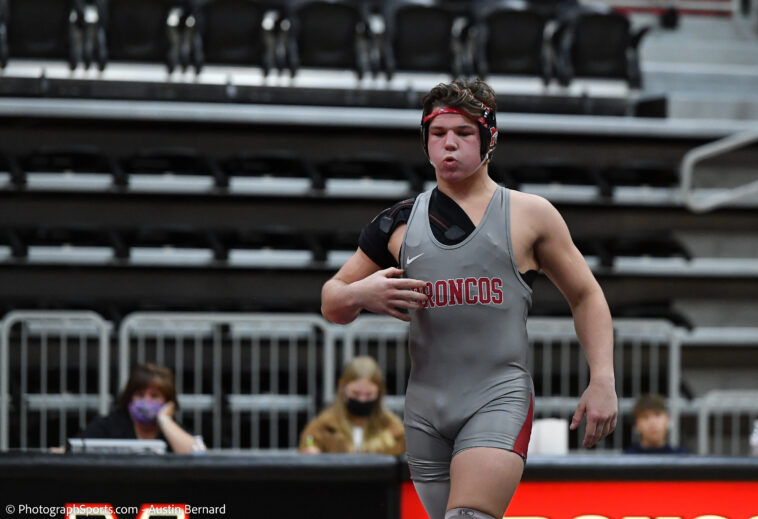 The 2021 wrestling season came to an exciting end this past weekend at the Stride Bank Center in Enid with Mustang, Skiatook, Tuttle and Marlow claiming Dual State championships.

Friday saw Classes 4A and 5A battle for the state titles, while Classes 3A and 6A competed on Saturday.

In a loaded Class 6A field, it was Mustang that battled to their first Dual State championship with a 45-22 win over Bixby in the finals.  To get to the finals, Mustang first defeated Choctaw 63-18, then reversed a regular season loss to Edmond North with a 35-24 semifinals win.  Bixby opened with a 63-18 win over Ponca City and then defeated Broken Arrow (winner of the past two 6A Dual State titles) 35-33 to move into the finals.

A key for Mustang was the return of Tate Picklo.  Injured in the state finals, most (including Picklo himself) thought his season was over.  As quoted in one newspaper, Picklo stated “I knew it was something I wanted to do.  Even though it was painful, I just had to put the team first.”  Picklo picked up a key fall in the win over Edmond North and then in a rematch of the state finals, pulled out a big 8-6 win over Bixby’s Jersey Robb.

Like all of the championship teams, it was far from a one-man show, as it took a total team effort to win the rematch with Edmond North and then claim the championship with their win over a very talented Bixby team. In the finals, the Broncos used falls from Tucker Owens, Bam West, John Wiley, Jack Kitchingham and Christian Rowland, a major decision win from Keegan Luton and wins from Kylar Kurtz and Brannigan Reyes to wrap up the championship with their 45-22 win.  The 45 points Mustang scored in the finals is the 3rd most ever scored in a Class 6A final, trailing only the 50 points scored by Ponca City’s 2004 team and Broken Arrow’s 2019 team.

Edmond North’s 78-0 win over Union established a Class 6A record for most points scored in the first round and put them in a tie with Duncan for 2nd best for all classes.

The final champion crowned was Class 3A Marlow as they defeated Blackwell 53-15 to win 4th Dual State title and their first title since 2008.  Finishing as state runner-up the past three years, the Outlaws brought home the gold trophy this year as they capped their undefeated dual season with the Dual State title to add to their Individual State championship won two weeks ago.

Marlow marched to the finals with a 45-21 win over Sperry and a 46-23 semifinal win over Bridge Creek.  Blackwell made their first finals appearance since 2014 with a 36-29 win over Comanche and then reserved a regular season loss to Jay when they defeated the Bulldogs 41-33 to advance to the finals.

This writer has compiled a 33-page booklet of the Dual State records and all of the results since the first Dual State Tournament was held in 1989.  If you would like a free copy of these records, please send an email to [email protected].