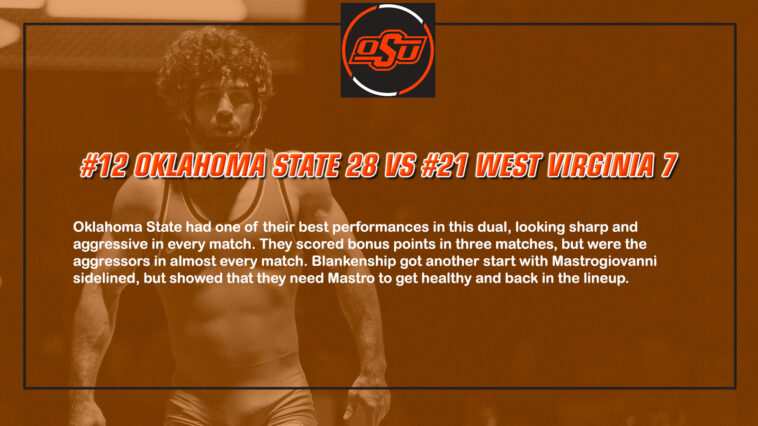 Oklahoma State had one of their best performances in this dual, looking sharp and aggressive in every match. They scored bonus points in three matches, but were the aggressors in almost every match. Blankenship got another start with Mastrogiovanni sidelined, but showed that they need Mastro to get healthy and back in the lineup.

Gfeller had a tight match, but Hornfeck is one of the lankier 157’s and that can be a tough puzzle to solve. He stuck to his moves though and it paid off. He showed his underrated ability to ride, as Hornfeck was looking to roll and create quite a few scrambles but Gfeller had over a minute of riding time at the end of the match.

Sheets lost his fourth match in a row, but gave Hall a tough match with his scrambling off of Hall’s shots. Sheets has shown his toughness in not giving up bonus points so far however, as all but one of his losses are to ranked opponents. With every upcoming opponent ranked in the top 25, he will need even more of that stout defense.

Plott and Joll were in a wild back and forth match after Joll took an early lead. Plott’s gas tank and offense wore Joll down as the match went on though and he ended up pulling away in the third. While not his best performance he showed the grit and cardio that makes him such a tough match and got the win.